It’s better to give and give than to receive 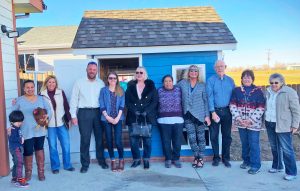 A chicken coop that was constructed as an Eagle Scout project by Berthoud resident Tristan Clarkson that was donated to the Luau for Lumber fundraising event in January for Habitat for Humanity Berthoud has found a new home. The highest bidders for the coop at the live auction were Heath and Reanna Carroll, owners of the Carroll-Lewellen Funeral and Cremation Services in Longmont. After the Carrolls discovered a Habitat family had saved money to bid on the coop themselves the couple decided to gift it to that family. A small gathering took place at the home in March to celebrate the coop being placed on their property, as the family wanted to thank the Carrolls for their gift. Representatives of Habitat for Humanity Berthoud were also present to celebrate. (L-R) Sung Mo Moon, Fatima Gonzalez, Jan Dowker, Heath and Reanna Carroll, Jennifer Powell, Maria Garcia, Sharon Derstine, Ric Haskins, Leanna Konechne and Carolyn Kube.