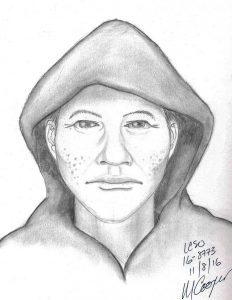 The Larimer County Sheriff’s Office is still investigating an attempted abduction of a teenage girl on Nov. 4 in Berthoud.

As of Nov. 15, there was no new information to report but the investigation continues, according to sheriff’s office spokesman David Moore.

“We have received several tips so far and hope they continue coming in,” Moore stated Nov. 15. But there was no new information to release regarding the attempted abduction.

Larimer County Sheriff’s deputies reportedly responded to the area of Eighth Street and Hummingbird Place in Berthoud after a 14-year-old girl reported an attempted kidnapping at approximately 7:30 p.m. on Nov. 4. The girl stated she was standing on the sidewalk waiting for a friend to pick her up when an unknown white male approached her from behind and grabbed her by the arm. The suspect pulled her into the street and the girl broke free and was able to get away unharmed. The suspect fled the area on foot, according to details provided in a press release Wednesday.

The victim described the suspect as an adult white male with a slender build and approximately six feet tall. He was wearing a black hooded sweatshirt with the hood over his head, brown dress pants, and unknown-colored tennis shoes. The victim also stated the suspect had what appeared to be acne scars on his face.

A K9 was used to search the area for the suspect, and deputies canvassed the area, but did not locate the suspect or any additional witnesses. Investigators have interviewed the victim and were able to meet with a forensic sketch artist on Nov. 8. The victim provided a detailed description of the suspect and a sketch was produced and distributed by area news outlets.