There are no instruments, yet when the five members of Face take the stage the audience is treated to one of the more sonically-pleasing experience of their lives.

The internationally-acclaimed, all-vocal rock band, Face, will be performing at the Berthoud High School auditorium on Oct. 7, as a fundraiser for the new outdoor classroom at Ivy Stockwell Elementary. 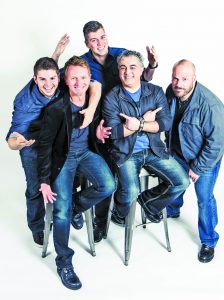 Face Vocal Band, which originates from Boulder, has toured the world over the course of its long and productive 16-year career, including headlining Edinburgh’s prestigious “Festival Fringe” as well as Red Rocks Amphitheater this summer. However, it is their heart for education (and raising money for it) that may be as massive as their musical talent.

In fact, the entire possibility of how such a national act was scheduled to perform here in Berthoud is a result of something only a tight-knit, caring community such as Berthoud can produce.

After plans for a special outdoor classroom for STEM activities was announced, local businesses jumped at the opportunity to help, according to Ivy Stockwell principal, Rick Bowles.

“It was such a whole community approach,” Bowles explained. “We had so many local businesses that chipped in and have helped – from getting deals on concrete to having people donating bushes and getting great deals on rocks, to people just donating their time.”

However, despite all the generosity, these projects still cost money, which is why Carol Dykes and her daughter Randi Romans, who both had children or grandchildren attend Ivy, came up with the idea to create the Face Vocal Band concert fundraiser.

“They took it upon themselves to organize the whole [concert] on their own,” Bowles said. “They took care of getting sponsorships, advertising, getting the venue, getting the band. They just really love the Ivy Stockwell community and wanted to do something to help, even though they don’t have kids or grandkids here anymore.”

For those who are unfamiliar with Face, or have yet to see them perform in concert, Mark Megibow – who serves as the a cappella group’s vocal percussionist – characterizes the music from the band as “upbeat, happy rock music,” which ultimately presents a family-friendly atmosphere with fun and dancing aplenty.

In addition to doing recognizable covers of hit songs, past and present, Face also performs original material and is well known for their banter between songs, as Megibow considers all the members “brothers in every sense of the word,” which adds a comedic element to each performance.

However, despite Face’s world-wide fame, the vocal group has not lost sight on its close connection with its loyal fan base as well as special bond with education. Megibow, along with other members of the band, have worked as teachers and are passionate about raising money for the schools, particularly music education.

“How great is it to raise money for music from music?” Megibow gleefully asked. “We love going to schools and performing for them.”

“We put a tremendous amount of energy into our shows,” he continued. “We all love to perform, love the audience. We do not play roles on stage, we play ourselves, and we are having the time of our lives.”

Tickets are still available for the Face Vocal Band – Ivy Stockwell Fundraiser Concert taking place this Saturday, Oct, 7, at 7 p.m. Tickets are $15 and can be purchased by calling (970) 532-3394 or by visiting: http://ivystockwell.seatyourself.biz.