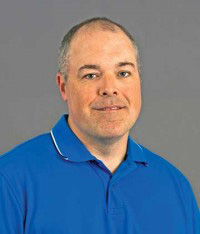 The Berthoud Board of Trustees held a special meeting the evening of Tuesday, Nov. 21, to conduct interviews for the position of interim town administrator. The interim position became necessary when Hart announced his retirement would be effective at the end of the month, and he would not be interested in continuing on a month-to-month contract basis. The interim position would be for a limited period of time; two to three months at most, until a new town administrator can be put in place.

The candidates voiced support for one another and assured the trustees there would be no feelings of jealousy by the two candidates who are not selected. All three candidates expressed teamwork and the feeling of working on a team.

Following the period of questioning the trustees wrote the name of their selection on slips of paper and handed the “ballots” to the town clerk to be tabulated. The vote was unanimous for Olinger.

At the previous (Dec. 14) board meeting Trustee Kelly Dunkelberger requested there be a discussion regarding the code of conduct which the trustees were to follow. Dunkelberger’s request came about due to a “polling” of board members which had recently been conducted over the phone by Mayor Steve Mulvihill. The reason for the polling was due to Mulvihill’s perceived need for a hastily called special meeting of the board, although Mulvihill did not specify a reason for the meeting at the time he did the polling.

Furthermore, Dunkelberger stated she had not received a phone call concerning the polling, and one or two of the other board members had also not been called. She indicated frustration there was no process for holding board members accountable when board members do not follow the code of conduct that was previously agreed to.

Town Attorney Greg Bell began the code of conduct discussion by stating he was looking for direction from the board. He indicated he could bring a number of scenarios to the board for deliberation, but he would briefly mention some options for consideration.

Bell stated the board may want “a process whereby any board member who thinks a particular part of the code is not being followed can anonymously file a very specific complaint about that with the town clerk and then have the item brought to all of you without a name attached … if you are comfortable with that type of process I can write a resolution to that effect.”

“Secondly,” continued Bell, “What range of penalties do you want associated with it, because suddenly you are acting as your own judicial body among yourselves. You can envision the potential difficulties with that. You would like a range (of penalties) – the first being, ‘Hey, this is just a reminder. This came up and we, as a board, do not believe this is a path we chose to follow, and we want to remind everyone’ – all the way to, ‘This is egregious and needs to be properly dealt with.’ The statutes give you the power to remove a board member, after a hearing on something substantial. So, I guess I am looking for direction about just how far down this rabbit hole do you want to go?”

Following some discussion, the trustees were persuaded that voting over the phone which is carried out without full discussion by all board members (outside of a meeting) is wrong.

Mulvihill stated he had made a mistake and it would not happen again.