Hungry Berthoud softball looks for a return to state

Hungry are the Lady Spartans.

After last season, where they missed the state playoffs for only the second time in the last decade, the Berthoud High School (BHS) softball team is ravenous for a return to Aurora. 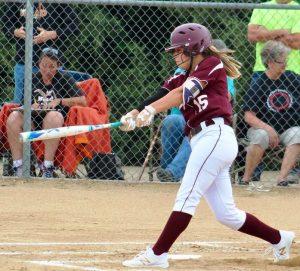 File photo – Berthoud’s Addi Spears at bat in a game last season at BHS. Spears is a key member of a talented and experienced Berthoud team that is aiming to return to the state playoffs after having come up just a hair short last season.

Entering his fourth season as the team’s head coach, Kouns said he sees a team that is more unified and pulling in the same direction this year, not to mention one that is returning a boat-load of talented and experienced players.

A change in the scheduling procedures will afford teams an additional four regular season games this year, a change Kouns believes will be beneficial to his club. To fill three of those four extra slots in the schedule, Berthoud signed up for the Erie Tournament of Champions, a prestigious invitational event which will serve the dual purpose of boosting the team’s RPI and giving Berthoud a chance to compete against some of the best teams in the region.

Jorissen will enter her third year as the Lady Spartans workhorse inside the circle, where she has garnered All-Conference honors in each of the previous two seasons and tallied 23 combined wins. Jorissen is also no slouch at the plate – she has hit .388 and .467 the last two seasons and combined for 61 hits, 49 RBI, and 45 runs scored.

Kouns called Balliet an All-Conference and All-State Honorable-Mention player last season, “the best third baseman in the state at any level,” and expects the junior to continue to be a driving force in Berthoud’s potent offense, one which Kouns says will bring more power to the plate than it has in the last several years. “The amount of power potentially that we throw out here … six or seven of us can potentially hit the ball out every time up,” Kouns said.

Senior Spears and junior Natalie Fisher will also pitch for Berthoud. Spears has combined for 44 hits, 15 of which went for extra bases, the previous two seasons and will play the demanding shortstop position, while Carly Rafferty has solidified her spot as the team’s every-day first baseman. Mandi Laib will catch and Fisher, when she’s not pitching or playing second base, will occupy the designated-player spot in the lineup because, in Kouns’ words, “we have to have that bat in the lineup.”

“I think just the drive to essentially make up for last year, they’re ready, they want to go. They are motivated to get back to Aurora and then, you get there, and all bets are off … anything can happen once you get there,” Kouns said, citing No. 11 seed Mountain View winning the 4A state title last year against long-odds.

The Lady Spartans will open the 2018 season at home against Thompson Valley in their annual under-the-lights game at BHS on Monday, Aug. 20. First pitch is set for 7 p.m.