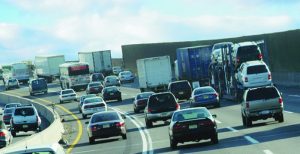 The Colorado Department of Transportation (CDOT) is reminding drivers to anticipate heavy traffic in many areas of the state this week.

“This is traditionally the beginning of the busy summer traffic season.  The snow’s gone, children are out of school and vacation travel is building,” says CDOT Executive Director Michael Lewis.  “With July 4th falling on Wednesday, we’re expecting to see a significant jump in traffic before and after the actual holiday so people should make their travel plans accordingly.”

To reduce potential delays, all CDOT construction projects will be suspended statewide on Tuesday, July 3, at noon.  The only exception is for emergency operations.  Work can resume on Thursday, July 5, at 8:30 a.m.

Heavier than normal traffic should be anticipated on the state’s main thoroughfares, including Interstate 25 and Interstate 70, especially between Vail and the Denver area.

The traffic counts during last year’s Fourth of July holiday at the Eisenhower/Johnson Memorial Tunnels between July 1 and July 5 totaled 231,371 vehicles.

However, since Independence Day is Wednesday, traffic counts traditionally are higher than normal but lower than when the 4th falls on a weekend.

Please be aware that due to this year’s wildfires, a highway can be closed at any time to facilitate firefighting activities, evacuations or for other public safety functions.  Additional information regarding fire bans and fireworks restrictions is available at www.colorado.gov

Information regarding the opening and closing of the state’s highways is available at all times on the cotrip.org website or by calling 511.  Updates are also available via Twitter @coloradodot and be sure to “Like” our Facebook page at www.facebook.com/coloradodot.