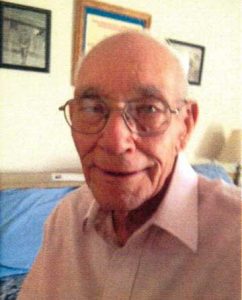 Gene and his twin brother, Jack, were born on July 21, 1929, to Faye and Bessie (Broyles) Morehouse in Taylor County, Iowa. He graduated from Hopkins High School in 1947, where he met and married Doris Garten on June 8, 1948. Gene served in the U. S. Army during the Korean Conflict with the Mountain Division in Austria.

In 1959 he and his family moved to Greeley, where Gene worked for Woodies Distributing Co. and Nor-Colo Co. While with Nor-Colo he was transferred to Longmont. He retired in 1993 and shortly afterward moved to Berthoud.

Gene was a loving husband and family man. He enjoyed his work and made friends everywhere he went. He especially enjoyed spending time with his grandsons.

Gene is preceded in death by his parents; brothers Jack and Richard Morehouse; sisters Leota and Marjorie and their husbands.

A memorial service will be held in the future.

Carroll-Lewellen Funeral and Cremation Services is entrusted with services.