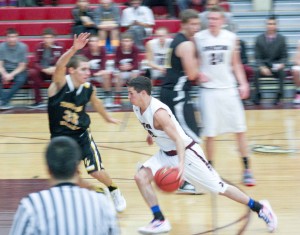 At the end of the day, wins are wins and losses are losses; and they all add up equally in the standings. Yet, ask any athlete or coach, and there are some wins and some losses that mean more than others.

The Berthoud High School (BHS) boys basketball team got one of those means-more-than-one wins last Thursday night as they bested Thompson Valley 54-52 in the BHS gym.

“That was the best game we’ve played, by far, all year. It’s the first game we’ve played 32 straight minutes as hard as we could. We executed, we followed the game plan, we followed the scouting report, we rebounded,” said Berthoud Head Coach Anthony Urrutia after the game. “I’m really proud of my guys. They played their hearts out tonight. Every guy that played tonight played as hard as he could.”

A scintillating game that became more closely contested with each second that ticked off the clock ultimately ended in the Spartans’ favor, thanks in large part to the 12-point fourth period turned in by Berthoud point guard Nate Hammel. The dozen points Hammel hung on the board in crunch time, courtesy of a six-of-eight effort from the line to go with a three-of-four mark from the floor, proved to be enough to push the Spartans across the finish line and snap a three-game losing streak.

It was an important win for Berthoud, as the team enters Christmas break on a winning streak and with some much-needed confidence.

“It’s a huge win for us because it gives us momentum,” said Urrutia. “It gives us a huge confidence boost; hopefully it gives us that jump-start going into conference (play).”

By his own admission, Hammel is “not the biggest or the most athletic” player. But the senior’s unparalleled will to win was on full display on a pair of lay-ups; the first at the 1:36 mark that put Berthoud ahead 48-44, and the next with 1:04 on the clock to give the Spartans a 50-47 advantage. On both plays, Hammel pressed the lane and each time was able to find the bottom of the net despite being swarmed by Eagles defenders.

“I just find a way to do it,” Hammel explained.

Urrutia was pleased, but not surprised, by the performance of his team’s leading scorer.

“He was making the right read; he was doing what a point guard is supposed to do,” Urrutia said.

A pair of free-throws from Berthoud’s Patrick Barron, who scored four of his six points on the night in the game’s decisive final period, gave the Spartans a four-point cushion that was just barely enough to maintain the home team’s lead after a miraculous three-pointer from Eagles junior Jake Hornick.

Hornick’s trey fell with just 14 seconds remaining and cut the Spartans’ lead to just one, a lead that was extended to the two-point margin of victory when Hammel drained one of two free-throws he earned after getting hacked on an in-bounds pass.

Asked how he responded to the pressure of the late-game free-throws Hammel said, “It just goes through my head how many free throws I’ve shot; I’ve got that confidence that I can knock it down.”

The Spartans made good on 12 of 15 foul shots in the fourth period, two of the six, which Hammel made, came on a technical foul that was called on Thompson Valley star Cole Robinson. Robinson and Hornick were two players whom Urrutia said the Spartans hoped to limit.

“They’re great players, and you can’t shut them down, but you can limit them,” Urrutia explained. While Hornick scored 16, and Robinson 19, the Spartans were able to overcome their strong-as-expected efforts thanks to Hammel’s 21 and another 14 from junior center Cody Braesch, who also pulled down a game-high 11 rebounds.

“This was huge,” Hammel said. “After coming off a couple tough losses it was really good to roll out 32 solid minutes of fundamental basketball.”

Berthoud (4-5) will be able to enjoy the win over their neighbors to the north for a couple weeks before they return to the court on Jan. 6 when they will begin their Tri-Valley Conference schedule against the Erie Tigers (3-4).