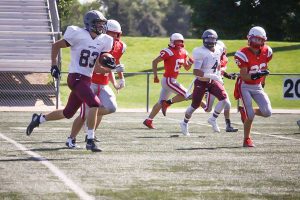 Berthoud wide receiver Jackson Hall returns a punt for 86 yards and a touchdown in the first quarter of
the 53-7 victory against Arvada, Saturday. Hall ended the day with two receptions for 142 yards, both for
touchdowns, the punt return, and an interception on defense.
Jan Dowker / The Surveyor

Part of what makes a team evolve into a good – if not great – team is overcoming adversity and playing through distractions. The Berthoud High School football team had a rare 11 a.m. kickoff last Saturday at Trailblazer Stadium in Lakewood against the Arvada Bulldogs, making focus a bit more challenging.

The Spartans looked every bit a distracted group of teenagers to start the game. However, sometimes a single play can energize a team. During the game that play was an 86-yard-punt return for a touchdown by senior wide receiver and punt-returner Jackson Hall that sparked the Spartans offense. Once the scoring seal was broken, the offense flooded the field with touchdowns and took a commanding 40-0 lead into halftime.

“We had planned on being successful in the special-team’s game and we all played a part in crossing the end zone for a touchdown,” said Hall. “It felt great to score on a punt return, since I can’t remember our team scoring on a punt since I’ve been in high school.”

On their way to 40 first-half points in their 53-7 win, Berthoud spread the scoring opportunities across the board. The second touchdown was on a 21-yard run by senior running back Chad Ellis. On Arvada’s next possession, Hall intercepted the ball. One play later, senior quarterback Cody Braesch threw a perfect pass to a streaking Mccallan Castles, and the sophomore sprinted down the Spartans sideline for a 72-yard TD.

Senior Steele Castles got into the highlight reel by blocking a punt deep in Bulldogs territory. Then Braesch used his legs to run 13 yards for a TD, pushing the lead to 27-0. As the offense began to score repeatedly, they saw many positive individual efforts. One of those was senior Lucas Czarnecki, who played very well at the right offensive tackle position.

Sophomore backup quarterback, Brock Voth, was inserted in the second quarter to give Braesch a series off on a very hot day playing on artificial turf. Voth responded by hitting Hall on a slant pattern that resulted in a 48-yard TD.

After senior running back Ben Poirier’s 41-yard touchdown was nullified because of a penalty, he got some redemption, punching in another touchdown on a tough five-yard rushing effort to end the first-half scoring.

Led by leading tackler, linebacker Jamie Gray, Berthoud’s usual tough defense didn’t disappoint. The Spartans extended their scoreless streak at halftime to six quarters to begin the season. The Colorado High School Activities Association (CHSAA) has a rule that if any team is leading by 40 points the clock continually runs. Berthoud found itself with a running clock late in the second quarter.

However, the first half didn’t come without some concerns: senior Ellis, who starts on both sides of the ball, had a leg injury and shed his pads at the half. Berthoud was already without its leading rusher and tackler, senior Jimmy Fate, from an ankle injury in the week-one victory over Valley. Fellow senior running back and linebacker Adam Lockard also didn’t dress because of a shoulder injury.

“This game gave us a great opportunity to give our depth some experience,” said Spartans head coach, Troy Diffendaffer. “We were able to play all 37 players who dressed out.” Not only did all 37 players see time on the field, but 16 players recorded tackles and six different players scored touchdowns.

The second half was highlighted by the longest pass in the state when Braesch hooked up with Hall for a 94-yard touchdown.

“As I walked to the line of scrimmage on 3rd-and-20 at our own six-yard line, I saw Jackson on an island and knew he could beat the corner,” said Braesch. “It was a good opportunity to take a shot down field and it ended up being a 94-yard touchdown pass.”

“A key for us in this game was our execution after halftime,” said Diffendaffer, “we scored on the opening drive after the half, and that was one of our goals.”

The final touchdown was from Voth to sophomore wide receiver Wyatt Woodrick on a 51-yard catch-and-run. Sophomore Ryan Schmad kicked five extra points on the day.

The Spartans shut-out streak ended at seven quarters when the Bulldogs scored in the closing minutes of the game. A definite positive out of the scoring play was in Cally Castles trying to take responsibility for the touchdown even though it wasn’t his assignment that was blown. “We are trying to get more kids to not point the finger at teammates and point the finger at themselves, and that was a huge step in the right direction for this team,” commented Diffendaffer.

When asked about moving forward and the upcoming homecoming game against Fort Lupton (0-2), and the rest of the season, Diffendaffer said expanding and executing the playbook as well as reducing penalties is the goal.

“We have some very tough opponents coming up in the schedule and we need to execute even better to compete with those quality teams,” Diffendaffer said.