Walking into the Hale & Bradford Distillery in downtown Berthoud is an entry into a cozy, ultra-modern silver and pine atmosphere of cocktails, fly fishing and the outdoors.

Jim Dawe of Berthoud opened the tasting room and distillery this week, that he co-owns with Jay Stalnacker of Berthoud, Matt Dean of Denver and Mike Lindstrom of Golden because it was time. The grand opening will coincide with Berthoud Day on June 2. 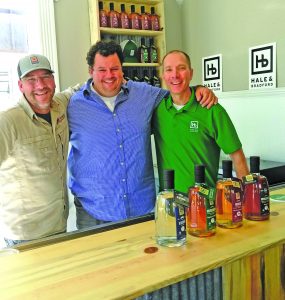 “It’s just the next stage in our business, to offer a place where we could have tastings,” Dawe said.

“We wanted an area where we could have people taste things and also buy our product in mixed drinks, and they could also hang out,” Dean said, adding though Berthoud has breweries, it doesn’t have a bar in downtown. “There’s not a place somebody could get a cocktail without going to a restaurant.”

The distillery is at 441 Mountain Ave., which once housed Linnertz Hardwood Floors that consolidated operations in a warehouse location in Berthoud. Dawe and the ownership team acquired the building in early April and did light remodeling work of painting and installing a bar and shelving to display spirits, T-shirts, hats and fly-fishing gear. Stalnacker built the bar and several sets of shelves, using Colorado beetle-kill pinewood, adding recycled corrugated steel for accents.

“We like the fact it’s nice and small and creates an intimate atmosphere,” Dawe said. “It goes along with the theme of the small-batch experience.”

The tasting room seats four at the bar, six at tables and 12 on the patio. The room showcases some of the distillery barrels, including several that have been aging for 14 months.

“The bourbon is unfiltered, which is our claim to fame, so it’s a little bit cloudy,” Stalnacker said. The oils from the wood are kept on top of the liquid instead of being scraped off to add to the bourbon’s flavor components.

“It’s the flavor of the wood, its aging process, so it gives it a very oaky, caramel-ly and vanilla flavor,” added Dawe.

Hale & Bradford carry two kinds of bourbon, vodka and rum, with the labeling and branding tied to the mountains, with names like Backcountry Bourbon, Backcut Rum and Bluebird Vodka.

“When we started distilling, it was mainly for fun,” Dawe said.

Initially, Dawe and Lindstrom gave away what they made as Christmas gifts to family, friends and coworkers at Tasman Geosciences, Inc., the Denver-based environmental engineering firm Dawe owns — he serves as the chief executive officer and founder. Dean is the chief financial officer and Stalnacker the corporate health and safety officer.

Dawe and Lindstrom found they received too many requests for a hobby venture and four years ago became official, selling their product a year later.

“Our clients started asking where they could actually buy it, so we decided to make it a business,” Dawe said.

Dawe and his founding team, that later included Dean and Stalnacker, subcontracted their recipes to a local distillery in Fort Collins that does the bulk of their distilling, though they handle small-batch distilling for products like the peach brandy and vanilla rum. Their product lines are in more than 100 stores, mainly in Northern Colorado.

“It’s fun to start from the ground up. We were small in the back of a warehouse, and now we have a tasting room,” Dean said. “It’s kind of fun to see it grow.”

Along with the spirits, the Hale & Bradford Distillery will sell Seattle, Wash.-based Wetfly fly-fishing supplies that include rods, reels and flies, operate weekend guided tours, and offer casting lessons.

“We’re in the hub of the Big Thompson, Poudre, St. Vrain and Boulder (rivers),” Stalnacker said. “We anticipate there are others like us that enjoy the outdoors who want somewhere to socialize.”

The distillery, tasting room and fly fishing shop initially will be open 4-10 p.m. Wednesday to Saturday, with plans to add more hours as business grows.

Dawe has another project that involves opening a family restaurant, Bradford’s, by mid-July in the former Odd Fellows building, 335 Mountain Ave. He is the building owner and his brother, Rob Dawe, the restaurateur. They co-own the restaurant, which will feature American cuisine and a bar serving cocktails made with the Hale & Bradford spirits.

The Dawes, who purchased the building in April 2017, are restoring it to its historical origins, stripping it back to the bare-wood floor and brick walls. The main floor will seat more than 60, and the upstairs will feature a banquet room.

“It’s taken a little longer than we expected because we wanted to do a full restoration of the building,” Dawe said.