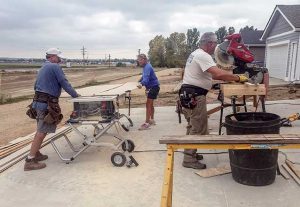 Bill Moriarty, left, and his wife, France Moriarty, center, cut plywood while volunteering at one of the under construction Habit for Humanity homes in Berthoud.
Another volunteer, Rick Huls, is part of the Car-A-Vaners group that was recently in Berthoud.
Katie Harris / The Surveyor

On the dashboard of Bill and France Moriarty’s Freightliner sits a letter they received eight years ago.

Though the woman who wrote it was all but a stranger to them, they’ve reread the letter nearly every day; on their way to work, at the end of a long week, or perhaps during a fleeting moment of doubt as to whom their effort helps.

The Moriartys are volunteer project managers for the Habitat for Humanity RV Care-A-Vanners Disaster Response program. Over the past decade they’ve responded to crises across the nation, spending three years in New Orleans after Hurricane Katrina and months at a time in towns devastated by tornadoes.

Like most care-a-vanners, the couple typically spends two weeks on, two weeks off, when on the road. During their downtime they travel and sight-see, then come back and build for a while. They’ve spent the past three weeks in Berthoud, finishing the exteriors of two Habitat homes currently under construction.

Bill retired from the South Florida corporate world of construction in 2002, at the age of 44. His wife France was 39.

“We’d made enough money,” he said. “We had gotten to the point where we said ‘this is enough.’ The Lord had given us so much already and now it was time for us to give back.”

“Bill loves construction and building and now he gets to do it for fun,” said France. “It’s a whole new ball game when you’re doing that.”

The letter came about after an extended stint in Cedar Rapids following the floods of 2008. “We’d been very mission-focused during our time there,” said Bill. “We were busy, pushed for time before the winter season.” 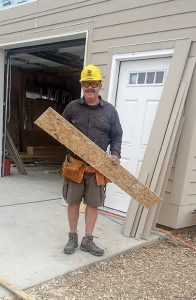 Habitat for Humanity volunteer Larry Jones helps get the homes ready for dedication
next January.
Katie Harris / The Surveyor

His team met the recipients of the houses they were working on, but only briefly, in passing. It wasn’t until they’d moved on to the next city they received the letter in the mail.

“Dear Friend,” the letter began. “A year ago we lost our home of 14 years to the flood. I was saddened, confused, and unsure of our future.” The letter shared the difficulties and uncertainty the family had faced over the past year.

“Now, a year later, thanks to many volunteers and people associated with Habitat for Humanity, we have the chance to rebuild our lives,” it read. “Today, as we find out which home will be ours, I will cry tears of joy. For today is the start of a new life, a new beginning for our family.”

France said the letter has served as a devotion of sorts, a reminder of why they’re here.

“We do this stuff and we don’t realize how much we impact people’s lives,” she said. “Every once in a while we get something from a homeowner that reminds us.”

Rick Huls was part of the care-a-vanner team that worked on the Berthoud homes in the second week of their stay. He and his wife Paula live in their RV full time, touring the country.

“This week we’re Coloradoans,” he said. “Next week we’re headed to Arizona, so we’ll be Arizonians. We follow the sun.”

Huls said, like the Moriartys, he and his wife love giving back. Through Facebook they’ve kept in touch with a handful of families they built homes for over the seven years they’ve been volunteering, and had the opportunity to see the kids growing up.

“The most rewarding part is when we get to attend a dedication,” he said. “Seeing the kids’ expressions when they get to move into the home makes it all worth it.”

Another care-a-vanner couple, Larry and Ty Jones, stopped in Berthoud to pitch in on their way from the Kenai Peninsula in Alaska on their way back home to Illinois.

“We lived out in this area after the flood in 2013; working in Loveland, Lyons and Longmont,” said Larry. “We couldn’t pass up an opportunity to swing back by on our way home and help out.”

Bill said he and his wife chose the Habitat cause to give back to because of their own pasts.

“We both come from dysfunctional homes,” he said. “The care-a-vanner program is about fellowship, traveling, seeing the country, but most of all it’s about helping someone who can use our help without asking for anything in return.”

Whether it was Bill sawing boards and hammering up siding, or France running logistics, organizing and categorizing tools and material, it was rare to visit the Habitat job sites on North Fourth Street the past few weeks without catching sight of the two hard at work. With the tasks at hand completed ahead of schedule, and a few extras buttoned up as well, the couple and their crew are headed off to the next project in need of volunteers.

“After so many years of doing this, the houses all seem to blend together,” said Bill. “It’s the people you meet along the way, the families that make it meaningful.”

“The truth is, we go around planting little seeds but rarely ever get to see the harvest at the end,” said France. “That’s why we keep the letter, to remind us that there are real people out there whom we’re doing this for.”