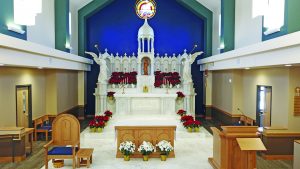 First, the church’s name is Guardian Angels Catholic Church, and second, the angels bring attention to the church, located near Weld County Road 7 and Highway 66.

One of the angels is a 14-foot bronze sculpture of a guardian angel, created by Carey Hosterman of the Rocky Mountain Bronze Shop in Loveland.

The other two angels are part of a 22-foot tall marble reredos, which symbolizes the gates of the heavenly city of Jerusalem. The reredos, which is a large decoration placed behind the alter, purchased from a former church in Philadelphia, torn down four years ago, features two angels blowing trumpets and forms the backdrop of the sanctuary in the new church.

The bronze sculpture, which is outside facing downtown Mead, was installed Dec. 3 before the church’s first services in the new building on Christmas Eve. The installation was during a dedication event attended by 200 people.

“It’s quite visible. It’s on the main corner in Mead,” said Father Alan Hartway, pastor administrator of the church at 109 Third St. “The name of the parish is Guardian Angels, so that’s why we had a guardian angel statue.”

The campaign for the church’s new building also reflects the guardian angel theme, Spreading Our Wings, launched in 2015 to raise $4.5 million over five years, through 2020. The new building, which is 12,500 square feet, is on the same property as the original church.

The new church consists of a sanctuary able to seat 250 — the original church could seat 99 — along with a dining hall, commercial kitchen, three meeting rooms and office space. The original church lacked a dining hall and offices, but the parish hall, also on the property, has a dining room that can seat 140 people. That building will continue to be used for meals, educational programs and community rentals.

The original church, founded in 1911, five years after the founding of the town of Mead, remains on the property and will continue to be used after restoration work is done to the building, Hartway said. Possible uses could include a prayer facility and access by the community.

“We did not and will not tear down the old building. It’s rather land-marking in Mead,” Hartway said. “Like any old building, it needs attention and loving care.”

The original church, known for its white siding and blue roof, was built in the carpenter Gothic architectural style, common in the late 1800s. In 1929 an addition was built on the rear of the building, doubling the church’s size.

“People are emotionally attached to the place because so many things have happened there over the years,” Hartway said. “It’s one of the last remaining representative pieces of what they called in those days, carpenter Gothic architecture.”

Today the church has 270 registered families, and the original building was not able to meet the needs of the growing congregation.

The new building will have enough space for expanded programming, several groups to meet at once, and larger events, such as weddings, funerals and sacraments, as stated on the church’s website, meadangels.org.