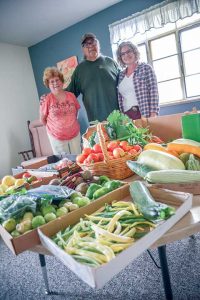 Kelly Hines Keller, right, from Plant A Row for the Hungry is photographed with First Presbyterian Church members Sally Seitz, left, and Donald Houle, center. Keller delivers extra produce grown locally to the House of Neighborly Services that operates out of the church on Tuesdays. Houle and Seitz contribute produce grown at the church. All the food goes to families in need.
John Gardner / The Surveyor

In the fall of 2011, Kelly Hines Keller found herself with time on her hands, a desire to give back, and a garden overflowing with vegetables.

The local graphic designer’s youngest child was preparing to head off to high school, and Keller had been increasingly spending her extra moments alone in the backyard, planting, weeding and harvesting. While her friends and neighbors gratefully accepted the heaping piles of excess produce she generously provided them with that season, Keller had begun to find herself with more vegetables than she could give away.

Thus, Plant a Row For the Hungry was born in Berthoud; a national program brought local, with Keller at the helm.

“I found this national association online, with a mission to bring enthusiasm, knowledge and involvement to supplementing local, healthy food for those in need, and I thought it would be fun to set it up here in Berthoud,” said Keller.

With a couple quick phone calls, Keller got the ball rolling. “I called some of my gardener friends and asked them if they’d be willing to offer up their surplus, and they were happy to help out,” she said.

All Keller needed was an organization to accept the produce. She found it in Berthoud’s House of Neighborly Service.

“Our food baskets are intended to provide a week of meals, and the fresh garden veggies from Plant a Row were just what we needed to make those meals complete,” said Linda Hirsch, Client Relations Manager in Berthoud for House of Neighborly Service.

The organization provides one food basket per month to families in need in Berthoud. Currently, its client base is made up of 38 percent seniors, 40 percent families with children, and 22 percent adult families without children. House of Neighborly Service in Loveland was already working with a Plant a Row group there, so beginning the program at the Berthoud location was a natural transition.

With a plan in place, Plant a Row was ready for its inaugural season in 2012. Keller set up a Facebook page and quickly gathered a following of local gardeners eager to chip in.

She developed a system where, each Monday, participating gardeners could drop off any extra produce they collected throughout the week in Keller’s front porch cooler. On Tuesday mornings Keller would deliver everything she received to House of Neighborly Service in time for their weekly distribution day.

The process began without a hitch that summer, with Keller and her friends harvesting and donating a large portion of their own gardens each week, supplemented by donations from community members who gave what and when they could.

Around the same time, Berthoud’s Community Garden at Pioneer Park was being developed by Berthoud Local. The garden differed from others in that it was open to the entire community, with flexible usage, rather than being based on the typical model of renting out plots to individuals.

“Because it doesn’t have the same requirements as a traditional community garden, it can be used for lots of different things,” said Natalie Hoyt, coordinator of the garden for 2016. “One of the things that was decided early on was that it would be used to supplement Plant a Row.”

Keller coordinated with Berthoud Local and before long she and other community garden volunteers began harvesting the leftover produce from the garden each Monday to combine with the rest of the donated food.

Hoyt said the focus of the community garden has shifted over the last couple years, with an increasing emphasis on growing produce.

“This season we really focused on having the garden produce as much food as possible instead of flowers as in years past, so that we would be able to donate more,” she said. “Plant a Row is a great program and it’s an honor to produce organic, healthful veggies to those in need who wouldn’t otherwise have a lot of access to it.”

According to Keller, the community garden provides 25 to 30 percent of the total produce donated to House of Neighborly Service each week.

Hoyt said that she hopes more community gardens will crop up in Berthoud in the near future, and that they will have the opportunity to work with other organizations in the community, including the local school system.

“Berthoud is The Garden Spot after all,” she said.

All said and done, Plant a Row donated a total of 153 pounds of produce to House of Neighborly Service in Berthoud that first season.

Since then, Keller estimated that the group has grown by 50 to 100 percent each year, in part because Keller and her core group of 10 to 12 gardeners contribute more and more of their own gardens each year, but also because of a rise in the number of gardeners getting involved.

“We get new people moving to the community, and others who hear about the program through word of mouth,” said Keller. “I think people find that once they start donating it feels good.”

Keller said that, though the premise of Plant a Row is to plant an extra row in your garden each season for the hungry, most people just donate whatever they have left over each week.

With the help of new contributors, the program’s total donation has increased each year too; up to 663 pounds for 2015. And this year’s numbers are close to 800 pounds donated, with time still left in the season.

“September is one of our biggest months,” said Keller. “We have apples coming in as well as fall crops from those who planted them.”

September is a busy month for House of Neighborly Service too, the busiest so far this year in fact. According to Hirsch 47 family units were served in August–the largest number since January–and September is expected to be busier still.

In addition, Hirsch said 1,000 pounds more food was given out in August than the average, much of which was fresh produce from Plant a Row.

“Plant A Row, along with the First Presbyterian Church garden where we meet each week, and other individual gardens have made it possible for clients to receive fabulous, fresh, healthy vegetables throughout the summer and into the fall,” said Hirsch.

She said the families served often bring in their own recipes to share how they’ve used their vegetables, which has provided a fun, intimate way to get to know them better.

“House of Neighborly Service estimates that each pound of vegetables produced supplements four meals,” said Keller. “So on any given week if we donate over 100 pounds of vegetables, that’s a lot of meals we’re supplementing in the community.

“The food bank’s resources are often stretched, so anything we can do to help supplement that, especially with fresh whole food, is great,” said Keller.

The joy of giving

Keller, who claims to be merely the communications and delivery person, said Plant a Row is all about the joint effort.

“It’s really all about the gardeners,” she said. “They’re the ones who are bringing it to the table, so to speak.”

Keller said that, for her, having an opportunity to combine her love of volunteering with her love of gardening is what renews her excitement in the cause each season.

“As my kids have gotten older and I’ve had more time to devote to gardening, it’s really become dear to my heart to be in the garden and to know that what comes from the garden is homegrown and grown consciously,” she said.

“I’ve always shared with neighbors but this lets me share with neighbors that might not live right nearby, who I might not know personally,” said Keller. “It’s a tangible way to give, and a healthy way.”

Keller said she’s constantly amazed by the level of dedication in her fellow gardeners. “They’ve thought of things I haven’t even thought of, and come through in ways I can’t even fathom,” she said. “And I think they’re probably doing it for the same reason I am.”

According to Keller, the dedication of the staff at House of Neighborly Service is equally impressive. “They are so appreciative and are always there to help me carry stuff in,” she said. “It’s a real joint effort that way.”

Keller, who uses her own garden as a gauge to when the season starts and ends, expects deliveries to begin thinning out in October. She encouraged anyone interested in participating to find out more about Plant a Row for the Hungry on the national website, www.gardenwriters.org/Plant-a-Row, on the Berthoud group’s Facebook page, www.facebook.com/groups/berthoudPAR, or by calling her at 970-391-8845.

“Gardeners love gardening and sharing it; they feel proud of what they’ve grown, and inevitably they’re overflowing by the end of the season,” said Keller. “This is a great outlet for it.”