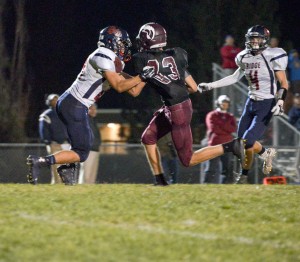 Berthoud wide receiver Jackson Hall, 83, breaks a tackle against a Northridge defender on Oct. 24 at Max Marr Field in Berthoud. This was Hall’s second touchdown in the game, and two-TD game for the second week in a row, but that wasn’t enough to overcome Northridge.
John Gardner / The Surveyor

Some losses are tougher to stomach than others. The Berthoud High School football team experienced one of those losses last Friday night as they fell at home 32-20 to 3A Northern Conference rival Northridge.

It was not that the Spartans played poorly – they were only outgained by 20 yards, 393 to 373 – but rather they made too many mistakes at what seemed to the be the worst possible times. Four Berthoud turnovers, two each on interceptions and fumbles lost, and six drive-killing penalties prevented Berthoud from ever taking control of the game.

“The thing that put our defense in peril there was our ineptness on offense,” said Berthoud head coach Troy Diffendaffer after the game. “You can’t make the mistakes we did; four turnovers, six penalties … we’re not good enough yet to overcome those types of mistakes.”

The real turning point in the game came early in the fourth quarter. With the scoreboard showing a close game, 19-13 in Northridge’s favor, the visiting Grizzlies recovered a Berthoud fumble and quickly drove inside the Berthoud 10-yard line. With their backs against the wall, Berthoud linebacker Ryan DeMoudt intercepted a Northridge pass in the end zone. The interception capped off a heck of a game for the senior, who led the Spartans with 12 total tackles. It felt like a game-changing play and instantaneously swung the momentum back in the Spartans’ direction.

Unfortunately for Berthoud, on its first play after the DeMoudt pick, Northridge free safety Brenden Fulton intercepted a pass over the middle and returned it for a touchdown, giving his Grizzlies a 25-13 lead with 10:28 remaining in the game.

Northridge put the game out of reach two possessions later when Fulton, who also plays quarterback, scrambled for 29 yards on third-and-long to get deep into Berthoud territory and, three plays later, ran right through the middle of the Spartan defense for a 26-yard touchdown that put the Grizzlies ahead 32-13 with just 2:31 remaining in the game.

Berthoud was able to keep the game close up until that point. After struggling to generate much rhythm on offense, the Spartans looked to have righted the ship coming out of the locker room to begin the second half. Berthoud defenders Steele Castles and Jimmy Fate notched back-to-back tackles for loss to force a three-and-out and a punt on Northridge’s first possession of the half.

Taking possession at its own 26, Berthoud mixed runs by Fate and Micol Woodiel and passes from Cody Braesch to Max Bump and Jackson Hall as they assembled their best offensive drive of the game. Hall would score his 11th touchdown of the season, and second of the game, on a 50-yard catch-and-run that brought the Spartans to within one score, 19-13. Yet that was as close as the home town Spartans would get.

Perhaps in an attempt to keep up with the Grizzlies aggressive offensive attack, the Spartan’s offense was uncharacteristically unbalanced on the night, with 57 passing plays to only 19 runs.

“We felt we could spread them out a little bit, hit our short (passes) and we knew they were going to be in that cover-four shell for us and we should have some things open with the receivers on the inside,” Diffendaffer explained about the pass-heavy approach. “We were trying to hit that, trying to get those [linebackers] out a little more and create some chances for us on the ground.”

Berthoud (7-2, 4-2) will conclude the regular season Oct. 31 when they travel to Johnstown for a meeting with Roosevelt (8-1, 6-0), who currently sit in first place in the 3A Northern Conference.