In one day in January this year three people were considering suicide, almost simultaneously, in three different locations across Larimer County. Law enforcement was contacted, but what happened next is a testament to what better resources, specialized response teams, and connectivity between agencies in the area are accomplishing to help improve outcomes and save lives. 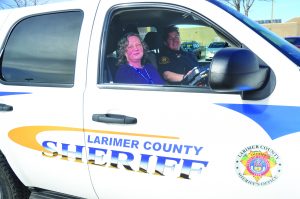 Just over a year ago a team of law-enforcement agencies and behavioral-health providers in Larimer County received a notice of award by the Colorado Department of Human Services Office of Behavioral Health for a grant to give local law enforcement more tools to help people with mental-health and substance-abuse issues. Larimer County Sheriff’s Office (LCSO) Deputy Cheryl Jacob and Lesley Craig, a social worker and mental-health specialist with SummitStone Health Partners are the team for LCSO, who combined have over 30 years of experience, that resulted from that funding. The two were trained to work side-by-side utilizing their skills to help play a part in addressing the mental-health crisis in Larimer County.

That day in January the duo responded to the first call received by law enforcement about a distressed person in Estes Park. In route to aide that person another call came from Berthoud – towns nearly an hour apart – which in a crisis situation could mean the difference between life and death. The LCSO team contacted a fellow co-responder with the Estes Park Police Department who was able to get a ride with a deputy to reach the distressed person so they could divert to Berthoud. The person in Berthoud was reached by Thompson Valley Emergency Medical Services, that, beginning this year also has a co-responder, and were able to assist the individual by taking them to the hospital to receive care.

While the Berthoud situation was being resolved, Jacobs and Craig were contacted about a third individual in Fort Collins who had threatened to harm herself. The woman’s exact whereabouts were uncertain, but it was thought she might be somewhere near Horsetooth Reservoir. A co-responder team from the Fort Collins Police Department would go to check the woman’s home, while Jacobs and Craig went to search for the woman at the reservoir.

Jacobs and Craig responded to 76 separate incidents that involved mental and behavioral-health issues in January alone. These calls can range from alcohol and drug-related issues, domestic and family problems, and a wide variety of mental-health issues as well as crisis situations that in the past could result in an arrest and require de-escalation – and that can take time. Craig commented many of those calls previously would have resulted in an on-going cycle. “Once they are released from the hospital or jail in traditional policing that’s where their hands are off of the situation, until, unfortunately, they are called back once again for the same situation in the not-so-distant future.”

Long-term solutions are one of the co-responder’s goals. The program aims to help give citizens in crisis an access point to assessment and treatment, in some cases diverting them from costly facilities like hospital emergency rooms and the county jail, with hopes of keeping them out of the criminal-justice system altogether.

Jacobs and Craig have both been surprised at the amount of case management they have taken on. Part of their job is sifting through duty reports to see if any names they have previously contacted come up. “If someone we’re familiar with were taken to the hospital, we follow up with them at the hospital to see if they were placed somewhere and then follow up with the family (they will ask the family) hey, we saw what happened last night, we’re here to help you, this is a new resource with the sheriff’s office, is there something we can do to help you out,”  Jacobs said.

One important point Jacobs and Craig both noted was that they are a resource for the community. “It doesn’t have to be a crisis. We’ve gone on a lot of calls where the person says, I don’t know what to do, can you offer me resources, can you come talk to this family member. It doesn’t have to be that they’re actively doing something. It can be a long term intervention,” Craig commented.

Because Craig is an employee of SummitStone Health Partners, a 24-hour facility that provides behavioral-health prevention, intervention and treatment services to residents of Larimer County, essentially embedded with the LCSO, she can line up services for that person, contact patient therapists and the hospital coordinator to explain what has happened thoroughly and where an individual they have contacted is, to ensure the best coordination of care.

Colorado consistently ranks among the highest number of suicides annually in the U.S. Suicide is also the leading cause of death for people between the ages of 10 and 24 in the state. Numbers like these are why voters in Larimer County agreed to a sales-tax increase in November last year to build a new mental-health facility and fund organizations that serve in that capacity throughout the county.

While discussing the past year for LCSO’s co-responder team and the the communities support of the Mental Health Initiative David Moore, a public information officer for the agency, said, “I think the co-responder unit is another example of how we try to engage the community and try to help the community to solve non-traditional law enforcement issues – mental health is not a law-enforcement-only issue, it affects us but it’s not really something that is our issue to fix by ourselves. We really need the community to help resolve that issue, and so we’re seeing that.”

Seeing the high demand and success the program has experienced, Lieutenant Robert Cook, who oversees the program, said LCSO is in the process of selecting an additional mental-health specialist to form another co-responder team which will be funded through the Mental Health Initiative.

When asked what their goal was as a team, Jacobs said, “As long as we have people we are going to have mental-health issues. We’re going to have crisis. We want to be an integral piece of that solution – it’s not going away, and we’re not going to fully solve this, but we are here for people not to fall through the gaps.”