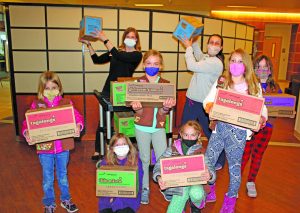 The cookies were dropped off by Berthoud Girl Scout Troop 75894, which is made up of nine young women ages eight and nine. The girls chose health care workers as their Hometown Heroes during this year’s cookie campaign and asked their customers to purchase cookies for the heroes. The girls traveled with their parents to Greeley at the end of April to deliver the cookies.

During the troop’s cookie sales, they told people they were earning money to honor health care workers. Upon hearing that, community members “emptied their wallets on our table.” One day during a two-hour period, the girls received $104 in donations.

“We are so honored to be chosen,” said Chief Medical Officer Dr. Angela Mills. Dr. Mills was joined by Walton, associate director of nursing for the intensive and critical care units, and Rhonda Alexander, an intensive care charge nurse.

Maureen McDonough, the mother of one Girl Scout, noted that the hospital representatives who greeted the troop happened to be all female, and the girls took a moment to learn more about different careers in health care.

As for the 180 packages of Girl Scout Cookies, Walton planned to share them throughout the hospital to recognize all the staff who have worked hard throughout the COVID-19 pandemic.