Colorado State Senate District 15, which incorporates all of Larimer County (outside the vast majority of Fort Collins) including Berthoud, Loveland and Estes Park, is an open seat this election cycle, as current state Senator Kevin Lundberg (R) is term-limited. With the makeup of the Colorado State Senate currently comprised of 18 Republicans, 16 Democrats and one Independent, the race for the open seat in District 15 is critical to the upper chamber’s balance of power. 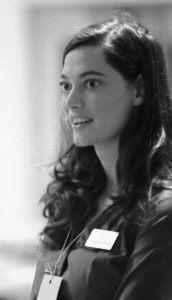 One of the candidates for the open seat in District 15, Democrat Rebecca Cranston, sat for a nearly 60-minute interview with the Surveyor on a wide and varied array of topics. Cranston came across as deeply passionate, exceptionally well-informed and in-tune, and well-versed with the issues facing the district she hopes to represent.

Demonstrating a full grasp of the nuances and complexities of public policy, Cranston said numerous times during discussions on issues ranging from healthcare to education to energy to the Second Amendment, that “there is no silver bullet,” solution to issues facing Berthoud, District 15, the state, and the country at large.

Cranston, a Colorado native who completed her graduate work at the McDonough School of Business at Georgetown University in Washington, D.C., explained her experiences as a one-time homeless child, human-trafficking survivor, and later as a foster parent, shaped not only her views on public policy but also spurned her decision to seek elected office. “The journey I have been through has really brought a unique perspective, and I believe those principles can be applied at a larger level,” Cranston said.

The theme of healing is the over-arching one of Cranston’s campaign. As she explained, “Because of my background, I know a lot about healing. I’m interested in talking about healing across our institutions and across our toxic political divide. Dems have not done the best job reaching out across the rural-urban divide, and I’m really invested in doing that and showing that we can still respect folks in their individuality while still having policy that helps us grow responsibly.”

Cranston won the nomination out of the Democratic County Assembly with 72-percent of the vote over Ralph Trenary of Loveland. In the run-up vote at assembly, Cranston faced – and overcame – accusations that she had fabricated her past as a human-trafficking survivor.

Cranston, who has not held elected office before, said when asked of her decision to run, “I decided to run for office around the time I became a foster parent. I’m part of the wave of women who saw a lack of representation in the leadership … our Senate is less than 20 percent (women). When I became a foster parent it became hard to explain to (her foster daughter) the level of toxicity. It’s beyond what we’ve really ever seen before.”

The former director of regional programs for The Northern Colorado AIDS Project, part of the Colorado Health Network, explained one of her primary focuses if elected will be working to eliminate the influence of dark money in Colorado politics. Dark money refers to unregulated and undisclosed contributions given to and used by non-profit groups; such funds are almost always used in attack ads and other types of negative campaigning. Cranston said she and her campaign expect seven figures worth of dark money to be used in the campaign for the seat in District 15.

“What I’ve learned about the process is the influence of dark money is hurting us all. (Dark money is) all negative, (it’s) designed to stoke fear about the other person,” Cranston said. “I want people to vote for me because I’m a good candidate and because I bring a lot to the table in terms of my qualifications and my education and how I will represent Senate District 15 and not because they’ve been made to be afraid of someone else.”

When asked what kind of legislation would be the first she would sponsor if elected, Cranston said it would be one dealing with dark money’s influence. She outlined a law passed in Montana in 2015 that requires the same accounting for all contributions used and said, “What (the Montana law) has really done is kept a lot of that dark money out, and I think we should do that here.”

Cranston said she understands the tremendous growth Berthoud is currently under-going and the burden is places on the town’s schools. Cranston said she “would absolutely support and vote for” a bond and mill levy for the Thompson School District. Cranston called education a “baseline priority,” and said TABOR should be reformed so as to allow the state to keep excess tax revenue garnered during periods of economic growth.

While saying emphatically she is not anti-growth but that, “we have to be smart about how we do it.” She said guns are part of the culture of rural Colorado and supports background checks and the closing of the gun-show loop-hole and added, “I think mental health access is a huge solution for some of the issues we’ve been having,” as relates to gun violence.

Cranston said she would seek an assignment on the Joint Budget Committee (JBC), calling herself “a budget wonk” and saying state budgets “are our moral documents.” Said Cranston, “Kevin Lundberg has served on (the JBC) and I think it would be great to have further S.D. 15 representation at the state level for those making our budgets.”

Asked directly of her message to the voters of Berthoud, Cranston said, “If the voters are tired of politics as usual, if they’re ready for a message of compassion and healing, and looking to the future, then I’m their candidate. I will govern with an ear toward listening and an eye toward the future. I’m here to stay, and I’m here because I love this place. I’m an economist by training, so I know how to spurn economic growth and protect the things we care about.”

Every Thursday evening Cranston holds what are dubbed as fireside chats at various locations in the district. She will hold a fireside chat in Berthoud at Da Bean on July 5 at 6 p.m. All those who are interested are encouraged to attend. Further information on Cranston’s campaign for state senate can be found on her campaign website at http://rebeccacranstonforcolorado.com.