Berthoud Chamber of Commerce at a ladies’ night event held in the Odd Fellows Hall on the second floor of the building at 335 Mountain Ave. When this photo was taken by a Larimer County property assessor in 1971, Tuffy’s Tavern occupied the ground floor room of the Odd Fellows building. 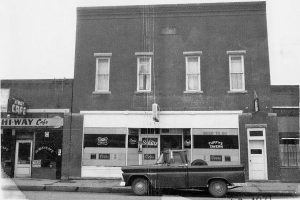 Photo courtesy of Berthoud Historical Society – In May 1944 a group of German prisoners of war entertained the Berthoud Chamber of Commerce at a ladies’ night event held in the Odd Fellows Hall on the second floor of the building at 335 Mountain Ave. When this photo was taken by a Larimer County property assessor in 1971, Tuffy’s Tavern occupied the ground floor room of the Odd Fellows building.

The German prisoners of war who helped Berthoud farmers harvest sugar beets in 1943 and 1944 also entertained members of the Berthoud Chamber of Commerce at a ladies’ night event in May 1944. The event took place in the Odd Fellows Lodge Hall that was located on the second floor of the Odd Fellows building at 335 Mountain Ave. That location now serves as the Hale & Bradford Distillery tasting room.

German prisoners of war held in camps across the United States were treated in accordance with the Geneva Conventions or rules of international law for the protection of victims of armed conflicts. According to Candy Hamilton in her 2009 book, “Footprints in the Sugar,”  the U.S. War Department took the five-fold view that: 1) America should live up to the spirit and letter of the Geneva Convention; 2) prisoners deserved humanitarian treatment; 3) that if German prisoners were treated humanely there was greater likelihood American prisoners would be treated better; 4) that well-treated prisoners would be more productive workers; and 5) news that prisoners were well-treated would make its way back to Germany and demoralize the ranks of German fighting soldiers.

Those were some of the reasons German prisoners who came to work in the Berthoud area from Greeley Camp 202 had many privileges within that compound that included organized sports, classes, choirs, orchestras and theater groups.  Music and theatre activities were prepared and monitored by the International Red Cross.

In May 1944 a small group of German POWs was invited to come to Berthoud from Camp 202 to present entertainment after a regularly scheduled chamber meeting. Following the event the Berthoud Bulletin reported, “…The remainder of the evening was then turned over to the guest entertainers who had been secured by the entertainment committee, consisting of Frank Stranahan and Gus Chandler. The boys, members of the staff of the P.O.W. camp (202) near Greeley, were under the supervision of Lt. Fred H. Kirk.

“Lt. Kirk gave a brief, but interesting talk concerning the P.O.W. camp. He mentioned that originally there was four-hundred (or upwards) army men stationed at the camp, however, the number is gradually diminishing, since many of the boys are being called into foreign service. He explained how the German prisoners will be put to work, helping farmers to raise the necessary food, so vital to the fighting man. Lt. Kirk introduced Pvt. Harold Kleckner, who very capably presided as master of ceremonies and with his merry patter evoked many hearty laughs from the audience. Pfc. Donald Moser sang a number of songs in a pleasing manner, followed by Pvt. Robert Goodwin, tap dancer, (outdone only by Fred Astaire) who pleased the audience with his tap dancing repertoire. Staff Sgt. Dave Scholk, talented pianist, played a number of selections. Staff Sgt. Norman Bauer, ‘and his violin’ gave out with three exceptionally fine numbers. Remarks by Lt. Kirk brought a highly entertaining program to a close.

“The audience was enthusiastic in their applause at the conclusion of each number which was duly appreciated by Uncle Sam’s boys.”

In 1944 meetings of the Berthoud Chamber of Commerce were highlighted with entertainment arranged by a two-person committee made up of Frank Stranahan and Gus Chandler. Stranahan operated the local mortuary while Chandler ran a shoe repair shop. Their idea to bring entertainers from a nearby POW camp to entertain chamber members proved to be popular and timely. There was no more need for Camp 202 after World War II ended in 1945.