Lauren Bowling of Berthoud wants her 4-year-old son, Miles, to be able to keep up with his two brothers and their friends at the playground.

To do that, she has to drive 40 miles to the fully accessible Inspiration Playground in west Fort Collins, so that Miles, who has cerebral palsy, can wheel around, roll up the ramps and use the playground equipment.

“He just wants to be like everyone else,” Bowling said. “He’s so little, we can carry him up and go down the slide with him. He doesn’t want to be the only kid who has to be on Mom’s lap.” 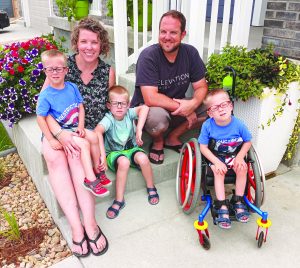 Photo by Shelley Widhalm – Lauren Bowling is with her husband, Richard, and their three sons, Mack, 4, Braxton, 5, and Miles, 4, as they sit in front of their Berthoud home. They will hold a Lemonade Stand fundraiser on July 17-18 to raise funds for handicap-accessible playground equipment for a pocket park in their neighborhood that will be open to the public.

Bowling wants to start with her neighborhood, Farmstead, which is planning to build a pocket park in the east Berthoud subdivision. The developer agreed to pay for half of the costs of an adaptive swing, estimated to cost $9,000 if she raised the funds for the rest. She got friends and neighbors involved to host a Lemonade Stand fundraiser on July 17-18 in conjunction with a community garage sale.

“Why are cities and towns not required to add accessibility in community spaces?” Bowling said. “It will make a difference on the rest of his life. Giving him independence now, giving him inclusion and accessibility now, will show him he is capable and that he can do it.”

Bowling’s son is fully wheelchair-bound, born with twin-to-twin transfusion syndrome — his twin is Mack, and their older brother is Braxton. Miles and Mack were born prematurely at 21 weeks, and at some point, in utero or during birth, Miles lost oxygen long enough that a traumatic brain injury resulted, causing him to develop spastic triplegia cerebral palsy.

“That means he’s affected on his right side and in his lower extremities,” Bowling said. “He’s unable to stand or crawl or walk or sit by himself. However, he is not affected cognitively or verbally, so he is smart and can tell us everything he wants and needs.”

When Bowling and her husband, Richard, realized that Miles would be in a wheelchair for life, they needed to make their home handicap accessible. At the time, they lived in a quad-level home in Mead but could not find any builders in the area who would reconfigure it. They learned about Dream Finders Homes in Berthoud, who built a customized home for them with the needed accessibility — they moved there in November 2020.

Bowling then contacted Farmstead in February or March and asked about its accessibility plans for playgrounds — the developer contacted a playground company and found out how expensive adaptive equipment is. The developer had already purchased equipment for a pocket park that was in the planning stages, but the equipment did not include a swing set. Bowling agreed to do the fundraising to purchase a high-back swing with a 5-point harness for the swing set, which also will have a regular swing.

Miles said he wants the swing to be blue and that when he goes to Inspiration Playground, he can “wheel around.”

“My wheelchair drove a long way,” he said. “I like to roll on the sidewalk when there’s hills.”

The developer has another park under construction, and one planned with a community pool. Any funds Bowling raises above $4,500 the developer agreed to use for adaptive equipment for the third playground.

Bowling got the idea for a lemonade stand where donations will be accepted for lemonade, shaved ice and baked goods. She talked with her neighbors about her idea, and they suggested coordinating it with the community garage sale, and one neighbor wanted to add baked goods.

“We’re trying to make enough money so we can build a park here, so we don’t have to drive far,” Braxton said.

Bowling is working to identify a nonprofit to partner with her so that she can accept digital donations through a website beyond the dates of the lemonade stand.

“There are more opportunities for fundraising, volunteering and bringing a fully accessible playground to Berthoud,” Bowling said.

Eventually, Bowling would like Berthoud to have a fully accessible playground — playgrounds may have components of accessibility, such as a surface that is wheelchair accessible, ramps to access equipment and individual pieces of handicap-accessible equipment.

“There’s no reason we shouldn’t have that accessibility and inclusion available,” Bowling said. “It should be built in every park, so let’s bring it to our hometown and to our children.”