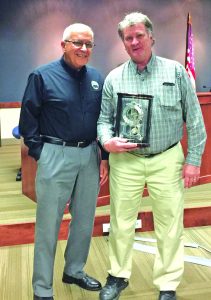 Mayor Mulvihill presented Mike Hart with a Bulova Wentworth desk clock with the inscription: “Mike Hart, In appreciation for your years of dedicated service, 2017, Town of Berthoud” at the Tuesday night town board meeting.

Turning more serious Hart stated, “When I came onboard we really did not know where the weak links were in the (infrastructure) system. If growth came, what infrastructure changes would be needed?”

He stated town staff began by making infrastructure master plans for the raw water treatment plant, the wastewater treatment facility, transportation (streets) and parks and recreation. All of those elements and more needed to be looked at, evaluated, and an analysis made regarding what would be the effect on those systems if the load from 100 or 200 homes were added.

“That has come a long way, and when growth started to come about two to three years ago we had already preplanned for a lot of the new development and made changes to infrastructure to handle it. We also knew what new infrastructure elements needed to be added as new developments came online,” Hart said.

“One of the big things was Berthoud’s water,” he continued, “Getting rid of the foul-tasting, foul-smelling water was huge for the town.” He went on to state town staff spent approximately one year listening to consultants about the water issues and it became obvious they had to bypass Berthoud Reservoir and divert the water from Carter Lake directly to the plant. “We built a bypass and dried out the reservoir. We let it dry for four years and rehabbed it for about $1 million, and now, with it full of water its worth about $20 million,” Hart said.

He stated another major accomplishment was moving town staff into the Guaranty Bank building. The town was able to purchase the entire building for a very reasonable price, and the purchase price included all of the furnishings. The bank leases space in the building from the town, along with two other tenants, so the town actually makes money on the deal. “I don’t know of any other community that does what Berthoud is doing with the town hall. The building even looks like a town hall,” Hart commented.

He made note of the fact that the old town hall, which the town still owns and is trying to lease space in, is more than 90 years old, and did not represent the town well.

The Interstate 25 subarea was not developed, explained Hart. There were no water lines, wastewater lines, or treatment facilities. The ownership of Love’s Travel Stop and the current owners of the Wilson Ranch property saw the potential of the interchange area and pitched in to help with the infrastructure costs. In past years town officials had worked with Wilson Ranch, Aims, and other property owners to try and get something started there, but without water lines, wastewater lines, and a wastewater treatment facility nothing happened. Getting the southwest corner back from Johnstown was a big step in the right direction. “The Johnstown town manager and I sat down and hammered out an agreement and we got that corner back. If we hadn’t gotten that corner back under our control Love’s was unwilling to build there. Having the Love’s facility at the interchange will bring significant sales tax revenue to the town,” said Hart.

“Another diamond in the rough when I arrived is the golf course. It was a project that had struggled at times, but I believed it was really important to the future of the town. It was great working with Jon Turner and Jim Birdsall to get it done. It brings a whole different character to the area and changes the profile of the town.”

Hart also noted the amount of money coming in to the town from building permits during his tenure. “We have gone from nearly zero permits in the early 2000s to almost 400 this year. As a result, there is money to put into streets, and the town is financially able to upgrade more infrastructure,” he said.

Other highlights included the town budgeting over $1 million dollars for park upgrades and trails and adding 300 acres of parkland; the town gaining control of Loveland Reservoir with the ability to make money selling the water; adding money yearly to purchase new Christmas decorations; simplifying the development code to make it more consistent, and developing a strong water master plan. Although Berthoud Reservoir is not open to the public yet, as there are many federal and state issues to deal with, Hart said his successor will be the one to work out the details of that resource. “During the upgrade a boat ramp was put in and the area next to the water built up for a trail. In the future residents will be able to take trails from downtown Berthoud to all around the golf course and up to the Loveland trail system, most of it on very scenic trails.”

Hart also mentioned his appreciation for the Berthoud’s police force. “The sheriff’s department has been very professional in providing excellent service to the community of Berthoud, and it has been a very great pleasure to have worked with them.”

“There is so much to do here, I could do this for another 20 years, and still not accomplish everything I would like to, but it is time to move on,” said Hart with a smile.

When asked if he had a message to leave with the people of the town he said, “Yes, get involved, pay attention to who you are voting for, pay attention to the planning process. Strategic planning is really important. You need vision from your leaders, and you need people on the board that won’t put a dome over the town. Look at what has happened in other communities. Berthoud is going to grow, it’s inevitable. Now is the time for Berthoud. Always ask yourself, ‘How do we make the best happen for the town?’”

Hart’s future plans include a move and apparently some uncertainty, “We have bought a home in Arizona and my wife Sara is super excited – but I’m worried about what I will have to do. I could always do underwater basket weaving. Getting up in the morning and not having anything to do scares me to death. I don’t want to be involved in politics or boards, and I want to work outside in a pickup, wearing jeans and boots. I’m looking forward to it but it’s hard to let go, especially when there are so many neat things going on here.”

In reminiscing a bit Hart stated, “The early boards I worked with were great. I had their full support and trust, and we made some really good headway. Tom Patterson and David Gregg were great to work with. It was always a great partnership.”

“I have enjoyed working in Berthoud and getting to know the citizens. It’s been a pleasure.”