From dogs to dragons – physical therapy for the love of animals

The bite of a Komodo dragon can be deadly. That’s why four Denver Zoo employees holding brooms, “just in case he didn’t like what I was doing,” accompanied physical therapist Tammy Wolfe as she approached Castor for the first time, she said.

The Komodo dragon is a carnivorous lizard that can grow to 10 feet long and 150 pounds. The largest known lizard species, it is native to Indonesia and can live up to 30 years in the wild.

But they had nothing to fear. 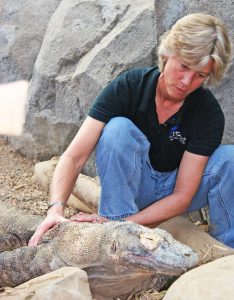 Photos courtesy of the Denver Zoo – Castor, a Kimodo Dragon at the Denver Zoo received physical therapy from Tammy Wolfe. Castor had limited mobility due to pain prior to receiving treatment.

Perhaps Castor understood Wolfe was there to help him.

He was having so much trouble walking he was spending most of his time in the pool.  “He was growing algae on his skin,” she said, because he was in the pool so much.  “I worked on his spine. I moved gradually toward more painful areas.” With her help, Castor was able to do well walking around for a year and a half before he died at the age of 21.

“Animals at the zoo are not domestic,” said Wolfe. “You have to be careful. Some need a distraction, like eating, while getting treatment. When they stop eating I need to leave.  Some do try to bite. I can’t work with some of them. I need to read the animals and depend on the staff. Don’t assume they are going to be okay with you there.”

Cyrano, an injured coati, did try to bite Wolfe a few times at first. A coati is a member of the raccoon family and about the size of a house cat. But he came to trust her and understand she was there to help.

Wolfe, who got her doctorate degree in physical therapy, had been working with dogs as well as people when she was drawn to a certification program in canine physical therapy offered at the University of Tennessee in 2003.

“I just love animals,” she said. “When I saw the brochure for the classes I decided I wanted to do that.”

Over time she developed her own technique, the Wolfe Kinetic Technique, for working with dogs, cats and exotic animals like those at the zoo. It is related to Feldenkrais, a physical therapy technique that is “basically a holistic approach to movement,” she said. “It ties tiny movements and movement of the whole body together.” Patients are taught how a tiny movement in one place can affect bigger movement elsewhere in the body.

Wolfe combined her knowledge of Feldenkrais with other techniques, such as mobilization and soft-tissue work. Because of the animal’s anatomical structure and tendency to be reluctant to get into the positions she needed them in to work on them, she gradually found solutions that evolved into the Wolfe Kinetic Technique.

“I didn’t realize I had a new technique until people watching me didn’t know what I was doing,” she said, and then began teaching her technique to others.

“Tying several physical therapy techniques together is more helpful for animals,” she said. “It teaches them how to move differently. It is neuromuscular re-education.  It shows them where they are moving well and encourages them to move better when they aren’t.” 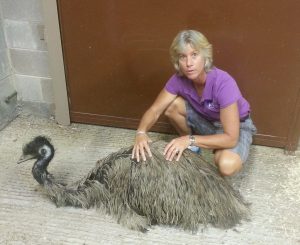 Polo the Emu received care from Wolfe at the Denver Zoo.

But, how to explain this to animals.

“I explain it to them through touch,” she said. “They feel it. They pay attention to how you touch them. Their nervous system picks up the difference. They feel the differences. They move differently because it feels better to them.”

Wolfe was working at a specialty clinic, Alameda East, when the zoo reached out for some expertise their veterinarians didn’t have. She accompanied her supervisor to the zoo to consult and teach the staff there some exercises that could help an orangutan.

Next she was asked to help with a flamingo that had surgery on a bad knee and had to wear a splint. She worked with it on weight shifting, teaching it how to get up and down and walk while wearing the splint.

“That was the first time I touched a (zoo) animal,” she said. 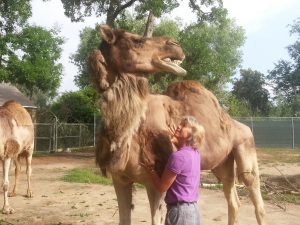 Kira the Arabian Camel at the Denver Zoo is greeted by Wolfe prior to being treated.

She has worked on Raja, Castor’s son, and showed zoo staff how to perform exercise techniques with him on a daily basis.

Currently, she is working with another coati, Madison, who is having difficulty walking because of spinal pain and weakness in her hind legs. “She is getting used to being touched. I am also instructing the staff, so she gets used to certain types of touching and on doing exercises with her.”

She is also working with two ungulates (hooved animals): Almasi, an okapti, and Rinny, a tapir, who have lameness from spinal problems.

Wolfe continues to work with dogs and cats at The K9 Body Shop, her business in Arvada, as well, doing manual therapy, ultrasound, acupuncture, laser treatment, and more, and has a swimming pool and underwater treadmill for them. She also gives owners exercises they can do at home.

“I do pretty much anything you do with people,” she said. “I love all animals.”

For more information about Tammy Wolfe and her work with dogs and other animals, please visit her website www.thek9bodyshop.com