A former Berthoud middle school teacher arrested in 2021 for allegedly having a relationship with a student has pleaded guilty to one of the felony charges he faces. 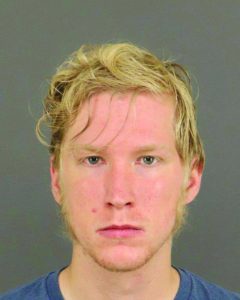 Kyle Faust, 24, appeared in court on bond last week where he pleaded guilty to one charge of sexual exploitation of children, a class 3 felony.

For the guilty plea, Faust submitted to the court the other charges were dismissed.

Faust was arrested in June, 2021 after the Larimer County Sheriff’s Office received a Safe2Tell report alleging an inappropriate sexual relationship between a teacher and student at Turner Middle School. Further investigation revealed the teacher was Faust and the victim was a 13-year-old girl. The alleged crimes against the victim began in March of 2021 and occurred both at and away from the school. Investigators executed a search and arrest warrant for Faust who was taken into custody without incident at his Thornton residence.

Eighth Judicial District Court Judge Sarah Cure scheduled Faust to appear for sentencing at 1:30 p.m. April 12. The charge against Foust could have a sentence of four to 12 years in prison. The maximum time, if there are extenuating circumstances could increase to 20 years.