A former Berthoud High School teacher and basketball coach has been charged with four first-degree felony charges of rape following his arrest Dec. 1 in Utah. 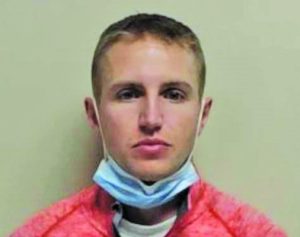 Zachery Kent Denison, 28, who resigned from his teaching position at Berthoud High School where he was also the boys basketball coach on Nov. 1 has been accused of being in a sexual relationship with a former student. According to a probable cause affidavit filed in the case the female student told authorities that the sexual relationship with Denison began in February 2019 when she was 14 years old, while he was teaching at Mt. Nebo Junior High in Payson, Utah.

Denison told authorities he had initiated contact with his student and reportedly confirmed that the sexual intercourse that began in 2019 was consensual. Denison surrendered a laptop and cellphone to police after allegedly stating that he and the juvenile had exchanged nude photographs through social media.

After moving to Colorado Denison would allegedly return to Utah occasionally to meet the girl for sexual intercourse at various locations including Denison’s home and the girl’s home.

The victim reported the sex offense to authorities Nov. 29.

According to Utah Criminal Code the age of consent in the state is 18 years old however for those over the age of 14 if the relationship was consensual the penalty is considered a third-degree felony. In this instance the first-degree charges stem from Denison holding a position of special trust over the victim who was under the age of 18.

Denison is being held in the Utah County Jail in Spanish Fork, Utah, without bond. A preliminary hearing is scheduled for Dec. 17 at the Provo District Courthouse.