First meet for track is a good one 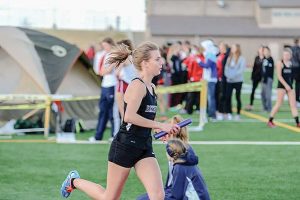 Alyssa Radloff won her heat of the 1600-meter run in a new personal-best time and ran in the 1600-meter relay in Greeley at the City to City track meet.
Courtesy of Renee Radloff / The Surveyor

Last Saturday the Berthoud High School (BHS) track team had their first test of the season at the City to City track meet in Greeley. Berthoud’s boys finished in fifth place, with 70 points. The girls finished in fourthy place with 55 points. The Roosevelt High School Rough Riders dominated the competition, scoring 141 points, and the Lady Rough Riders scored 181 points. Roosevelt has over 100 athletes out for track, giving them a lot of talent to choose from. Loveland, Mountain View, and the boys from Northridge High Schools finished ahead of the Spartans. Berthoud has changed divisions this year and has moved from 4A to 3A competition. The Spartans finished ahead of all of the other 3A teams in the meet (Eaton, Frontier Academy, and University).

The relays were strong events for the Spartans. Alex Paradise, Ty Williams, Kyle Conlon and Tanner Holmes were the first Spartans to score in the meet, with a fifth-place finish in the 4×800-meter relay in a time of 9 minutes 27 seconds. The boys and the girls 4x200m relay teams won first place. Michael Creager, Trinity Buckley, Ryan Schmad and Wyatt Woodrick ran 1 minute 37 seconds. McKayla Milan, Samantha Mulder, Jordan Hull and Hannah Langer won the girls race in 1:55.72. The boys 4x100m relay team of Miguel Sarmiento, Connor Siruta, Brock Voth and Jake Rafferty placed second with a time of 45.87. The girls 4x100m relay team of Cora Fate, Jordan Hull, Faith Kouns and Sophia Visger placed third in with a time of 54.72. Freshman Alex Schultz anchored the sprint-medley relay to a fourth-place finish in 4:41. Joining Schultz was Fate, Hull and Visger.

The junior class was well represented in individual events on Saturday. Connor Siruta was second in the high jump with a jump of 5’9”, which is just one inch shy of his best from last year. Brock Voth jumped further than he ever has, placing second in the triple jump with 41’6”. Jake Rafferty was very close to his personal- best time of 23.62 from last year. He placed third in the 200m dash with a time of 23.84 and fourth in the 100m dash in 11.88. Ryan Schmad was fifth in the 400 meters in 54.22.Wyatt Woodrick was sixth in the long jump with a 19’0.5”.Trinity Buckley placed seventh in the 200 in 24.65. Andrew Walker was seventh in the 110m hurdles in 20.07. On the girls side, junior Maycee White placed sixth in the 800m meters in 2:39. Visger placed third in the long jump with a leap of 15’3”.

The next meet for the Spartan track team is on Saturday, March 18, at Windsor.