The first positive West Nile virus mosquitoes have been detected in Larimer County this year. The positive mosquitoes were identified in traps located in southeast Fort Collins. No human cases have been reported in Colorado so far this year. However, human case reports usually peak in August and September.

Mosquito numbers are abundant in many areas of the County this year due to a wet spring and early summer. In a statement from the Larimer County Department of Public Health and Environment this week health officials remind residents to protect themselves from West Nile virus by taking steps to avoid being bitten. That can easily be done by using an effective repellent or staying indoors when mosquitoes are biting. 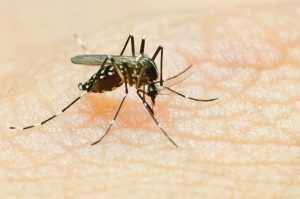 Trapping mosquitoes to monitor for West Nile virus risk began in June in Larimer County. West Nile disease is a viral infection which is spread to people by bites from infected Culex mosquitoes. Symptoms can range from none at all to severe illness. About 75% of people who are infected don’t have any symptoms; about 25% will develop West Nile fever which may progress to severe neuroinvasive infection. This may lead to hospitalization, critical illness, chronic disability, or even death.

According to the Centers for Disease Control and Prevention about 1 in 5 people who are infected develop a fever with other symptoms such as headache, body aches, joint pains, vomiting, diarrhea, or rash. Most people with this type of West Nile virus disease recover completely, but fatigue and weakness can last for weeks or months.

LCDH works with local cities and towns, a mosquito abatement company (Vector Disease Control International), and Colorado State University to monitor and assess the risk to Larimer County residents throughout the summer months.

West Nile virus can be prevented. In addition to community efforts, such as larviciding, reducing water where mosquitoes can breed, and spraying for adult mosquitoes, individuals can remember to use the 4 D’s to help prevent West Nile virus disease:

Defend – Use an EPA-registered mosquito repellent that has been proven to be effective against West Nile virus-carrying mosquitoes.  DEET, Picaridin, Oil of Lemon Eucalyptus and IR3535 are good choices.

For more tips on what you can do to prevent West Nile virus, visit Larimer.org/westnile