A two-alarm house fire that began Monday evening, Sept 10, has left a Berthoud family without a home and their business, Long Shadow Farms in need of assistance. 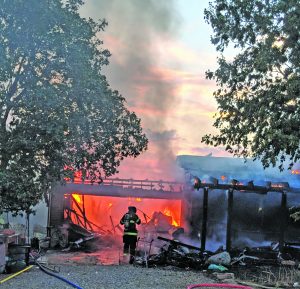 Photo courtesy of BFPD – Berthoud firefighters responded to a house fire west of Berthoud at Long Shadow Farm around 6:45 pm Monday, Sept. 10. According to BFPD, the home will be a complete loss.

According to the Berthoud Fire Protection District’s (BFPD) Public Information Officer May Soricelli, the fire began in the early evening hours toward the front of the home located on South Bothun Road west of Berthoud and quickly spread throughout the first floor. Firefighters arrived as the fire began to move to the second floor of the home. There were no occupants trapped in the house during the fire, but the family was present when the fire began. Crews remained on the scene to move through the home to extinguish embers and hot spots several hours after the fire had been extinguished.

The smoke and flames from the blaze could be seen for several miles. Larimer County Sheriff’s Office, Loveland Fire Rescue Authority, and Front Range Fire all assisted BFPD with the fire.

The owners of the property, Kristin and Larry Ramey have lived and worked the small family farm since 2007 when Long Shadow Farms was established. The couple has a nine-year-old daughter.

A fundraising site for the Ramey family has been started to try to help with immediate needs and to continue operating the farm with the aim of eventual recovery. The page explains that through their farm the family promotes local food production, and have been participants and strong supporters of Berthoud Local’s Farmers Market since its inception five years ago. Kristin sits on the non-profit’s board of directors and is currently serving as treasurer. The couple sells preserves, produce and meat from their farm, as well as host agricultural classes.

Although no damage was done to the barn and all of the livestock were unharmed the family lost three household pets in the blaze. According to the fundraising page, freezers in the home’s garage, where preserves and meat products the couple sells were stored, were also destroyed.

A post on City Star Brewing’s Facebook page states that donations to help support the family are being collected at the City Star Brewing taproom as well as Rise Artisan Bakery. The post also states that “They all ran out literally barefoot…They lost all wallets, so they have no credit cards or checks. Cash and gift cards are much needed because it’s the only way they will be able to purchase anything for a while.” The post continues by saying if you have larger items, like furniture or household items to donate to contact either business to be added to a spreadsheet for later pick up.

The family is also in need of large-breed dog food, as they own several rescue dogs the family refers to as their “livestock guardians”.

To donate to the online fundraiser visit https://chuffed.org/project/resources4rameys .