Being married for more than 50 years means you’ve spent at least 600 months, 2,600 weeks, 18,250 days and 438,000 hours connected to the same person. This is a milestone for any relationship and one that is increasingly less common. As Valentine’s Day draws near, a day to celebrate love and relationships, three Berthoud couples sat down to talk about their 50+ years of commitment and what love with longevity looks like. 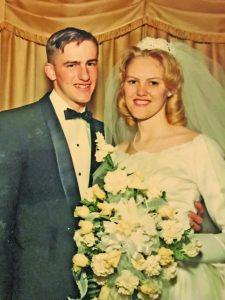 Ken and Jan Grack on their wedding day in 1967.

Ken and Jan Grack will be celebrating 51 years of marriage in April. The two attended school together in New Jersey and eventually connected as they shared a lunch-time, “I was a teenager with a big appe

tite. Jan would always bring an extra piece of cake or something, so we just started dating and went from there,” Ken explained.  “According to the teachers we were too young to date and it would never last,” Jan said.

The couple dated for several years and, in 1965, they were engaged to be married when Ken received a letter, “greetings, Uncle Sam needs you, so it was a correspondence courtship,” he said. Jan still has the letters the two wrote to each other while Ken was serving in the Marine Corp,. despite his self-admitted lack of skills in grammar or spelling.

The two were married in April of 1967. Ken left the military the following November and pursued a career in engineering, from which he eventually retired. 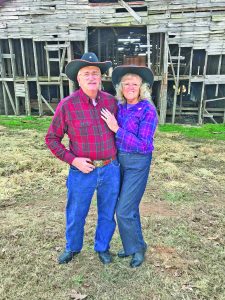 The couple had two children, Richard and Christine, and now they get to enjoy being grandparents to two granddaughters and a grandson.

A second career came along for Ken, inspired by a move to Virginia from New Hampshire where they had raised their family. “The kids thought we were going through a mid-life crisis,” Jan said, after they packed everything up, drove to Virginia and lived for a time in their pop-up camper, eventually upgrading to an RV. After being asked to help neighbors repair their RVs, Ken decided to take a two-year course to become a certified RV technician. “It was supposed to be part-time job to keep me out of trouble – give me something to do,” he said. But since moving to Berthoud three years ago and opening Ken Grack Mobile RV Repair Service, it could easily be a 24/7 operation.

Jan and Ken have straight-forward advice when it comes to commitment. “Here’s the secret to marriage, ok – you have to marry your best friend and you have to work things through,” Ken said. Jan added, “Marriage isn’t just falling in love, it’s working with your partner through the thick and the thin.” The two said they know each other so well they often finish each other’s sentences, occasionally to the other’s annoyance. Other things the two said were important were compromise, focusing on what’s really important in life, family, quality time as a couple, but balancing that with personal time and having fun together. Serving others has also become an important aspect of the Grack’s life together. The two volunteer many hours and are actively involved with the Rotary Club and the Berthoud Area Chamber of Commerce 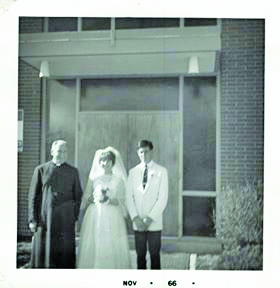 Ben and Dorothy Cross at their wedding in 1966. 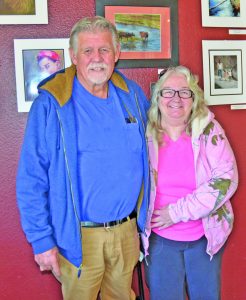 Dorothy and Ben Cross started dating as teenagers in the ‘60s. The couple had known of each other for years through mutual connections, but after Dorothy and Ben’s sister became friends Ben took notice, “I thought she was really cute. I really liked her openness, and she was so outgoing and I wasn’t – I just fell in love,” he said. Dorothy described Ben, “He was really nice to me, very polite, he would open doors for me; he was good looking too. He just won my heart.”

After dating for a few years with a few breakups along the way, going to school, and attending performances together, by Ben’s band at the time, Detonators, with whom he sang and played guitar, the couple decided to get married. On Nov. 19, 1966, at Saint John Catholic Church in Loveland, they said “I do.”

The couple’s first son David came along soon after. Two weeks after their son’s birth Ben received a letter informing him he was being drafted for the war in Vietnam. Ben explained he received a hardship deferment and was not required to go because of their new born baby, “Our oldest son saved me from Vietnam,” he said.

Ben and Dorothy bought their first house in Berthoud on a then-unpaved Seventh Street in 1973 for $19,000. Ben eventually became a journeyman electrical lineman with the City of Longmont, retiring four years ago.

Two more sons, Dennis and David, came along in the following years. Dorothy was surrounded by boys for many years in her house, but now the couple has six granddaughters, one grandson and, as they put it, 3.5 great-grandchildren (a new great-grand is due in May).

When asked to describe what has made their relationship stand the test of time Ben said, “I’m not sure how we’ve done it. We just love each other and we appreciate each other.” Dorothy followed up by saying, “You have to forgive and forget. You got to have a sense of humor – we both are on the same page with the sense of humor – we’ll laugh at each other.”  The couple has seen their share of disagreements over the years, but when asked how they handled those occasions Ben said, “We usually fought for a while and then sat down and really thought about what we needed to do – it was a mutual decision to work it out – whatever comes up we’re there for each other.”

Bill and Norma Megenhardt, both from a small agricultural town in Indiana, were also high school sweethearts who started dating in 1959 and were married in 1960. “We were up in town at a restaurant and I was telling him (Bill) how much I liked his car, and I told him I liked his car better than another guy’s car I liked too,” Norma said of one of she and Bill’s first interactions. For those wondering, Bill had a ’56 Ford hard-top. The couple took a drive together and Bill clearly had his eye on Norma, as their first kiss was shared that night. “Bill said that kiss was just as cold as it could be, but I didn’t know him that well,” Norma commented, but that was certainly not a deterrent for Bill to continue the relationship. 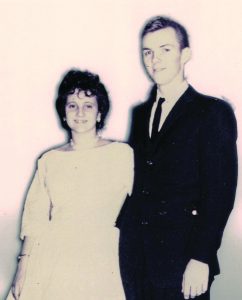 Bill and Norma Megenhardt on their wedding day in 1960.

Bill went into the Navy shortly before the couple was married, but due to lung issues and contracting pneumonia, his military career was cut short. The couple lived in Indiana for 13 years before moving to Colorado, spending 23 years in Longmont and the past 21 in Berthoud.

When asked why their marriage has lasted for so long Norma said, “It takes two people to make a marriage. You have to give and take and talk it out; you have to hang in there. If it’s worth it to you, you will.” Bill, described by Norma as being a man of few words, said with a grin that his approach to disagreements over the years was to, “stay away from her,” and Norma agreed giving each other space has always help 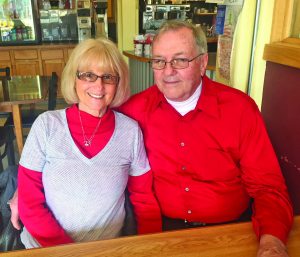 ed in those situations. The couple enjoyed camping and boating together over the years with friends and family and investing in quality time. The two said being affectionate is one of the keys to their success as well, including Bill still telling his wife she is “cute.” They also expressed the importance of having a strong family. The Megenhardts have three children, seven grandchildren and three great-grandchildren. Norma said, “We’re pretty simple people. We loved each other, got married, we had our children, we have our grandchildren, we’ve done some traveling,” to which Bill interjected, “It’s been a very enjoyable life.”

The love of family and each other, serving others, appreciating what they have, and a sense of humor are all characteristics that seem to be hallmarks of love that lasts. Through all of the changes in life, these couples have all found their equilibrium with each passing year. All of the couples, whether consciously or not, bring a sense of selflessness to their relationships. There is a balance they have each found to make their unique relationship work, and maybe, as one of the couples said, some stubbornness that has kept them together through everything life has sent their way.