Before the emerald ash borer can attack ash trees in Berthoud, town officials want to take preventative action by helping a few homeowners treat their trees. 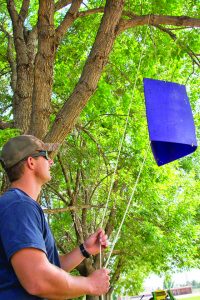 Josh Embrey, forester for the Town of Berthoud, sets out a purple-prism emerald ash borer trap in Bien Park in July 2016 to determine the insects presence in town

The ash borer, a nonnative invasive species of beetle originally from Asia, was discovered in Boulder in 2013 and in Longmont and Gunbarrel last year. The insect, in 30 different states and in areas of Canada, kills trees within five to six years of infecting them.

“It’s ranked as the number-one devastating insect pest to hit the U.S.,” said Josh Embrey, town forester and parks manager for the Town of Berthoud. “If left untreated, the emerald ash borer kills every tree in the area.”

The insect, believed to have been brought by ship on wood-packing crates in the early 1990s and discovered in 2002, is expected to eventually spread across the Front Range within 10 to 15 years. So far, it has killed 100 million trees nationwide.

“It’s a super unfortunate situation. However, we are fortunate enough to have a heads-up,” Embrey said.

Town staff and the Berthoud Tree Advisory Committee checked for the insect’s presence last year by conducting a branch sampling survey and setting out ash borer traps, showing negative results. This year the town will do the same thing to continue monitoring for the insect.

“There’s no threat yet,” Embrey said.

Even so, the Berthoud Town Board passed the Emerald Ash Borer Management and Response Plan in mid-February to protect the town’s trees from the insect in preparation for its potential arrival, focusing on treating, removing and replacing ash trees within the town.

The 25-page plan explains how 25 percent of Berthoud’s 3,500 street and public area trees are ash trees. The town’s park system and public rights-of-way have less of a presence of ash, or 11 percent of 1,000 trees.

The forestry division ranked the trees to determine which ones are treatable and which ones need to be replaced, assessing them based on condition, health, size, location and canopy cover.

The division plans to save three-fourths of the trees and remove the remaining one-fourth, mainly due to their poor condition. The plan includes a pilot cost-share program to help homeowners with ash trees in street rights-of-way pay for the treatment of the trees, a program planned for 2018.

The homeowners are responsible for the maintenance of trees adjacent to their property in the street rights-of-way, which is the area between the sidewalk and the street. The town highly recommends the homeowners opt to treat the ash trees or have them removed and replaced, as stated in the plan.

Homeowners are required to remove any trees that are hazardous to people and property, whether from insect or storm damage or other factors, Embrey said. If they do not remove ash trees damaged by the emerald ash borer if it arrives in Berthoud, the town can enforce the trees’ removal, he said.

The cost share program, as recommended by the Tree Advisory Committee, will cover the cost of 50 percent of the treatment of trees in street rights-of-way up to $200 per tree and up to two trees. If homeowners decide to remove an ash tree, the town will replace the tree with a different species.

The amount budgeted for the cost-share program, which will be operated on a first-come, first-serve basis, has not yet been determined, Embrey said.

“Without the plan, they would have to call a tree care company to treat the trees,” Embrey said. “With this, the town will be involved. … The town board wants to give it a trial run for 2018.”

The treatment involves the use of a product called Tree-Age, a systemic chemical injection that is 98 percent affective and lasts for three years, as stated in the Tree Advisory Committee’s recommendations. The treatment, a pesticide that costs $7 to $20 per diameter inch, is most effective when applied during the period from mid-May through mid-July, Embrey said.

The pesticide is transported by the tree and kills the larvae as they eat into the tree’s vascular system and also sterilizes the adults as they eat the leaves.

The insect, which doesn’t harm ash trees in its native land as they co-evolved and has no predators in other areas, infects trees in the larvae stage, Embrey said.

The female insects lay eggs in the crevices of the bark, and when the eggs hatch, the larvae bore into the tree, hence the name. The larvae create galleries within the tree as they feed, disrupting the tree’s ability to transport minerals and water, and the galleries increase in size as they grow.

“When emerald ash borer is introduced to an area, the population is so small it’s very hard to detect,” said Anthony Frederick, owner of Bio-Mechanics, LLC, in Berthoud and a member of the Tree Advisory Committee. “Then the population increases rapidly.”

Frederick has a booth at the weekly Berthoud Farmers’ Market to educate homeowners about the ash borer. He encourages them to work together in their neighborhoods to identify which trees should be saved and to help out those neighbors who need the financial assistance, such as through sponsorships, he said.

“If we lose the ash tree in conjunction with other species, we could lose much of the urban forest,” Frederick said.  “It really needs to be an organized event.”