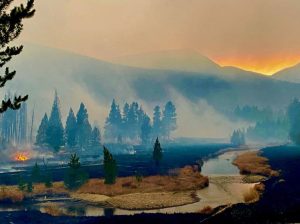 On Wednesday, October 21, the East Troublesome Fire ran approximately 18 miles before it moved into the west side of Rocky Mountain National Park, where rapid evacuations began for the Grand Lake community and park staff.   There appears to be some structure loss on the west side of the park, but initial assessment indicates that it is minimal. At this time, park officials are unable to fully assess those impacts.

On the morning of Thursday, October 22, a heat signature from the National Weather Service was picked up in the Spruce Creek drainage, on the east side of the Continental Divide in Rocky Mountain National Park.  The East Troublesome Fire had spotted approximately 1.5 miles from the head of Tonahutu Creek to the head of Spruce Creek.  Low clouds contributed to the challenge of assessing where smoke was coming from.  Park fire lookouts from near the Ute Trail along Trail Ridge Road were able to confirm a smoke column out of Spruce Creek.  Due to the location of the fire in the lower Spruce Creek drainage and confluence of Forest Canyon, evacuations began for areas of Estes Park.  Humidity levels yesterday greatly assisted in stopping the fire growth and it appears it has remained in that general location.  It is in the same general area as the Fern Lake Fire of 2012. 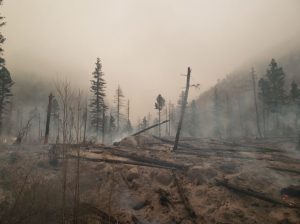 On the west side of the park, resources were focused on continual life and safety priorities and ongoing evacuations from the night before.  Numerous trees were down on the west side of Trail Ridge Road, north of the Green Mountain Trailhead, blocking that area as a means to evacuate on Wednesday night, October 21.  Weather conditions on the west of the Continental Divide were very different than the east side yesterday, with low humidity and winds continuing to add to the fire growth.  As of last night, the East Troublesome Fire had moved north of the Coyote Valley Trailhead.

Updates are provided by Larimer County Emergency Management at www.nocoalert.org  Sign up for the Larimer County LETA system, which will notify your mobile device of changing evacuation conditions.