Easing into the swing of things

Solem ready to compete with the state’s best golfers 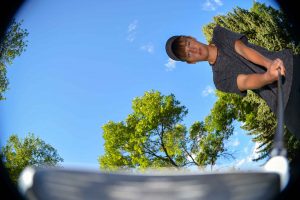 Berthoud’s Shawn Solem prepares to compete with the state’s best golfers at the 2014 4A State Golf Tournament at
Walking Stick Golf Course in Pueblo, Sept. 29-30. This is Solem’s second trip to the state tourney. Last year he finished at 37th place. This year, Solem looks to improve upon last year’s success.
John Gardner / The Surveyor

Shawn Solem has already met his goal for this golf season: qualify for the state tournament.

“From the first day [of the season] you’re fighting the whole season just to get to state,” Solem said.

Last year, as a sophomore, Solem qualified for and finished at 37th place at the state tournament played at Evergreen’s Hiwan Golf Course. He and his coach, Berthoud golf coach Mike King, set a goal for Solem to finish in the top 40 that year. And he did.

“The beginning of the year, it’s just trying to get to state,” he said. “And then the week before, then you kind of refocus on goals and what you’re trying to achieve.”

This year he’s refocused his goal to finish out the year strong and finish in the top 20; a realistic goal. But more than that, Solem really just wants to enjoy the moment.

“Just seeing everybody from around the state who qualified and being able to play with them was just awesome,” Solem said of the 2013 state tournament.

While his 37th-place finish last year is commendable for a sophomore, he feels that he’s put in the effort to improve and looks forward to competing with the state’s best this year at Walking Stick Golf Course in Pueblo, Sept. 29-30.

Just making it to state last year helped Solem focus more on the fundamentals of his game this year.

“I feel like I’ve put a lot more practice in this year,” Solem said.

In preparation for this season, Solem changed his practice regiment to include more time on the driving range, putting and chipping greens. He said that he played fewer rounds of golf compared to last year, limiting himself to a single round per week. And he said he’s noticed a difference in his game.

“I thought, ‘you’re not going to get better if you just play all the time,’” he said.

The hours spent on the range and practice greens seems to have paid off as Solem’s consistently finished in the top five in all but one of the tournaments this year. His highest round was an 86 at the Walt Clark Invitational at the Olde Course in Loveland on Sept. 3. But he’s not carded over a 78 in all the others. He shot a career competitive low-round score of 68 at Highland Meadows Golf Course in Windsor on Aug. 21, where he also carded his first eagle in competition, as well.

He attributes his success on the links to his improved mental game over the physical one.

“Golf’s 90 percent mental, because if you hit a bad shot in the water or something, people will be like, ‘that is the end of my round,’” Solem said. “But if you can work through that and finish the hole with a bogey, you can still have a great round.”

It’s that change in perspective that has kept Solem focused this year.

In the first Tri-Valley tournament of the year at Pelican Lakes Golf Course in Windsor, Solem’s mental game was tested early.

He started the day carding a triple bogey within the first few holes, he said. On the par five fifth hole he opted for a three wood to try and just hit the fairway to give himself a good second shot to the green. He wanted to play it safe.

“I snap hooked a three wood right into the water,” he said.

While he was frustrated, he kept thinking about saving bogey on the hole and saving his round. He hit his layup shot, from the drop area, that came within feet of the hole to save par.

“That really saved that round,” he said. He finished the day with a 75. But being able to overcome those early obstacles was even more of a victory.

“There is definitely a lot of frustration,” he said. “It’s just how can you control your frustration and bounce back from it.”

He showed the same resolve this year during regionals at Ute Creek Golf Course in Longmont, when he finished the round at a course par 72 and found himself in a head-to-head playoff with Silver Creek’s Jackson Solem (no relation). Shawn managed to birdie the playoff for the victory.

“You have to play like it’s just another day, because that’s all it is,” Solem said. “Once you start adding pressure, that’s when you don’t play well.”

In the three regional tournaments he’s played in since his freshman year, he’s shaved 18 strokes from his round. Solem shot a 90 his freshman year at regionals, but said that was a disappointment.

“I just had really high expectations,” he said.

He shot an 81 the following year and qualified for state for his first time.

This year, his 72 is again nine shots better than his previous year’s outing, and it’s helped his confidence as well. And it’s that confidence, his preparation, and drive that will help him this year in Pueblo.

“I know that on any given day, if I play my best, I can compete with the best,” he said.