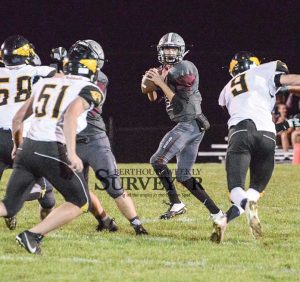 Berthoud quarterback Brock Voth looks downfield for a receiver during the second quarter of the homecoming game versus Thompson Valley at Max Marr Field on Sept. 30.
John Gardner / The Surveyor

Regulation time in high school football is 48 minutes. But through five games the Berthoud High School (BHS) football team has proven unable of playing at high level for the full duration. Berthoud has played well in spurts but now, at the halfway point of the 2016 season, the Spartans continue to search for a complete game.

Playing at Max Marr Field at BHS for their annual homecoming game on Sept. 30 against Thompson Valley, Berthoud was right in the game at halftime – trailing by just a single point, 7-6 – but the visiting Eagles scored on their first two possessions of the second half and ultimately handed the Spartans their fourth-consecutive defeat, 28-13.

“Right now we really have to focus on getting our kids to be competitive for 48 minutes, and that happens right over there on that practice field,” Berthoud Head Coach Troy Diffendaffer said following the game. “We need to get the guys to be competitive for two hours each day in practice there, and have that carry over to this field here.”

Berthoud did show some flashes on both sides of the ball. On Thompson Valley’s opening possession, the Spartans produced a goal-line stand that ended the Eagles’ drive when Wyatt Woodrick tackled Braydon Besse at the Berthoud three-yard line, resulting in a turnover on downs.

Yet the Spartans shot themselves in the foot on the next Thompson Valley possession. After stopping the Eagles before they crossed midfield, Berthoud was called for off-sides on the punt, gifting Thompson Valley a fresh set of downs. A subsequent facemask penalty on Berthoud provided a free 15 yards and also negated a Berthoud sack. The Eagles scored the first touchdown of the game six plays later on a 25-yard run by Thompson Valley’s Matt Berg.

“Penalties, mental mistakes, missed tackles are pretty much what kind of put us behind in this game,” Berthoud’s Jake Rafferty explained.

Berthoud responded to Thompson Valley’s opening score by capping off a seven-play, 73-yard drive with a 34-yard touchdown pass from Brock Voth to Ryan Schmad. The extra point attempt failed, but Berthoud was behind just 7-6 at the break.

The Eagles came out firing to open the second half, assembling a six-play, 79-yard drive that ended with an eight-yard touchdown run from Berg to put Thompson Valley up 14-6 just a minute and a half into the third quarter. Berthoud responded well, however, chewing up more than five minutes of clock on a 15-play, 62-yard drive that saw Voth and Rafferty connect twice on third-and-longs to sustain the drive. The Spartan offense fizzled out, however, as a pass on third-and-seven at the Eagle 30 fell incomplete and Berthoud elected to punt, hoping to pin the Eagles deep in their own territory.

Starting a drive in the shadow of their own goal line proved no problem for the Eagles, as freshman quarterback Cameron Neller connected with lanky wideout Charlie Brunner who galloped nearly the length of the field – 95 yards – to give Thompson Valley a commanding 21-6 lead with just 3:36 remaining in the third quarter.

The 95-yard score appeared to take the wind out of Berthoud’s sails while giving the heretofore winless Eagles a booster shot of confidence. With the big lead and Berthoud unable to develop much semblance of a running game, Thompson Valley was able to pin their ears back and rush Voth, ending the next two Berthoud possessions with turnovers on downs.

“The constant we need to work on is keeping ourselves fired up, because we give up a big play and then we end up getting flat,” Rafferty, who led Berthoud with eight receptions for 86 yards and also contributed five total tackles, said. “We need to work on just keeping our momentum going.”

Diffendaffer remarked on the struggles of the Berthoud offensive line after the game, saying, “Our front line today was horrible offensively. We’ve got to be able to create some type of push up there so we can establish a little bit of a running game so we can establish a passing game off of that … and it’s just unacceptable right now.”

Berthoud did score once more on a 21-yard run from quarterback Ty Beaman, who replaced Voth under center in the fourth quarter, and the Spartans subsequently recovered the on-sides kick with 1:57 left in the game. The drive failed to reach end zone, however, when Berg intercepted a Beaman pass on third and eight.

“We just need to find our passion and our heart to finish these games; there’s really nothing much to it, just focusing on playing football,” Rafferty said.