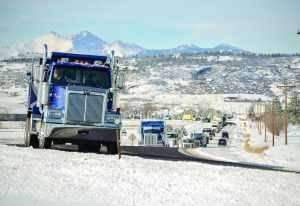 A convoy of friends and customers of George Wood, owner and operator of Heavy Duty Truck Repair, drive by Wood’s home west of Berthoud and honk on Saturday, Jan. 7. The convoy included 31 semi-trucks.
John Gardner / The Surveyor

The best things in life aren’t things. For Berthoud resident George Wood, seeing a big rig drive by his house and hearing the air horn sound provides a moment of joy that is worth more than the truck.

Wood is a mechanic and owner and operator of Heavy Duty Truck Repair near the Longmont exit at the intersection of Interstate 25 and Highway 66. He’s owned the business for 37 years, according to his youngest son, Stephen Wood, who is currently filling in for his father. George has worked on more trucks than one could probably imagine, but he was forced to give up the job he loved for so long two years ago.

George Wood was diagnosed with a neurodegenerative disease called corticobasal degeneration, or CBD, in January 2014. It’s a disease with symptoms similar to Parkinson’s or ALS but is apparently rarer. George’s disease has progressed and he is no longer able to work. The disease has also made it difficult for George to speak, according to Stephen, and he rarely leaves his home.

According to Stephen, it was difficult for George to stop working.

“He’s a very active person and was very much a part of the business,” Stephen said.

George and his wife of 40 years, Dianne, have lived in Berthoud for nearly 30 years; all their children, Genessa, Derrick and Stephen, attended schools here.

When George was first diagnosed, Tyra Pritt, office manager at Heavy Duty Truck Repair wanted to do something to show George how much people, mostly his customers, appreciated and cared for him.

“George is the most outstanding person I know,” Pritt said.

Pritt said that she’s seen George’s generosity firsthand through her position at his business for nearly 10 years. 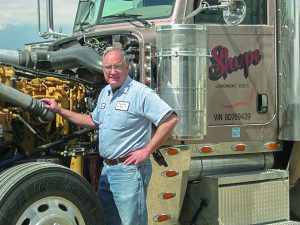 George Wood pictured near one of the trucks he spent his career working on.
Courtesy Heavy Duty Truck Repair

“I have seen how he has helped so many people, not only through his business but also through his personal life, church, and Boy Scouts,” she said. “I thought we should try and surprise him with a George celebration.”

She’s also been a recipient of George’s generosity and kindness. Pritt said George hired her to work at Heavy Duty Truck Repair in her mid-20s even though she didn’t have a lot of experience with bookkeeping.

“He hired me anyway and paid for me to get more schooling so I could do a better job,” she said.

He supported her and allowed her to work part-time so she could be with her family and raise her children. George is a family man, she said.

“He’s helped me a lot in my life. He has that personality with everyone; he gives people the benefit of the doubt.”

She planned the celebration with longtime shop foreman Allen Brossman. The gathering turned into a 500-person event that filled the Plaza Event Center in Longmont with George’s customers, friends and family. Some of his employees, including Pritt and Brossman, prepared speeches, while many others told stories about George.

Pritt said they received donations that covered the cost of the celebration and the extra money was donated to Cure PSP, an organization that helps support CBD and other brain-related diseases. After paying party expenses, they raised nearly $35,000 for Cure PSP.

“It was a beautiful tribute to a man who has impacted so many,” Pritt said.

One day when Pritt was visiting George at his home, he mentioned one of his customers would drive by and sound the air horns and how much George enjoyed it.

“He expressed to me how much he loves it when the trucks he used to work on [his customers] drive by and honk their horn,” Pritt said.

Pritt started asking some of George’s customers if they’d be interested in getting a convoy together and driving by George’s home, west of Berthoud, for his birthday. He celebrated his 62nd birthday on Jan. 3.

“Maybe it will bring him some joy,” Pritt said.

The morning of Jan. 7, Pritt and her family visited the Woods at their home. Pritt brought cookies because George loves cookies. 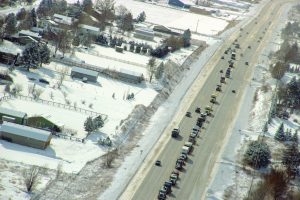 The convoy of friends of George Wood’s friends makes their way down Highway 287 the morning of Jan. 7 on their way to Wood’s Berthoud home. Courtesy Heavy Duty Truck Repair

At 11 a.m. that morning, George heard an air horn sound. He looked out the southwest-facing window of his house and saw the big rig of one of his customers rolling by his house. Then another. Then another.

In all, 31 big rigs, most of which he likely turned a wrench on at one time or another, rolled by his property; a symphony of air-horns filling the silence.

“He just had a pretty rough week,” Stephen said. “It couldn’t have come at a better time. It brought a level of joy to him and encouragement.

“We knew that it was going to bring joy to him,” Stephen said. “All these people have wanted to find something to do to show that they care and appreciate him. It was finally an opportunity to do that.”

George responded on Facebook to let everyone know how happy he was.

“I just had an amazing show of love, care and support by 31 customers of mine at Heavy Duty Truck Repair, who formed a caravan and drove by my house honking horns and flashing their lights!” the message read. “Thanks to all for bringing tears of joy to a hurting man! I can’t begin to say thanks enough! May God bless you all! You made my day wonderful!”