Deputy Kevin Kingston loves his job because he gets to spend the day with middle schoolers.

“I got the best job in the world. I hang out with sixth, seventh and eighth graders all day,” said Kingston of Loveland. “I like just being able to hang out with them, listening to them. It’s just fun. They’re just enjoyable kids.” 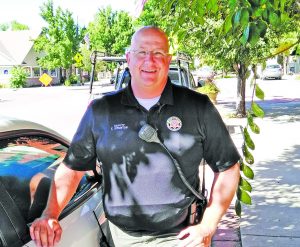 Photo by Shelley Widhalm – Deputy Kevin Kingston stands in front of his patrol car Sept. 13 that he uses for his patrol and school resource officer duties through the Larimer County Sheriff’s Office.

Berthoud High School has had a resource officer for six years, a position filled since July 1 by Deputy David Mosley, who also covers Ivy Stockwell Elementary School. Kingston and Mosley assist and cover each other at their respective schools, as well as assist with street patrol after school hours and during the summer months.

When the position was created Kingston immediately was interested, having already visited Turner several times for security and safety checks.

“Doing extra checks and walking through the school, meeting kids and seeing how kids interact with us, I thought this would be a great position,” Kingston said. “They’re fun. They’re funny. You never know what’s going to come out of a kid’s mouth.”

Kingston’s primary duty is at Turner is ensuring the safety of the students and staff and that the school building remains safe. He begins the day by standing out in the school’s traffic area, greeting students and telling them, “Good morning.”

“They’ll call out to me if my back is to them and wave just to say good morning,” Kingston said, adding that he greets students in the halls and receives quite a few high-fives throughout the day.

Kingston walks the halls to provide security, making sure the doors are locked — the school is a closed campus — and watching the video cameras to check that the students are making good decisions. During the school’s three lunch hours he is on lunch duty and has a presence in the lunchroom. He also offers mental-health support for students if they need it.

“I’m there for the students,” he said, adding he also has a presence at after-school activities, such as dances and sporting events. “If there’s anything that involves parents and kids or just the kids, I try to be there.”

Sgt. Jim Anderson, Berthoud police chief, who is with the Larimer County Sheriff’s Office, likes that Kingston shows an interest in the development of the students.

“He’s always involved in special activities with the kids,” Anderson said. “As a law enforcement officer, he has a heart of gold. He has a lot of compassion. He’s not one to jump to conclusions. He wants to listen to whatever is going on. Before he even tries to come up with a solution, he listens with everything he has.”

Kingston’s office is across the hall from the administration offices, located near the school’s only unlocked door that requires a buzz entry. From that vantage point he can provide additional security of the entrance and put a stop to immediate threats.

Kingston gives classroom presentations at the school on topics that include internet safety and emergency response in the combined physical education and health classes, and drug education and searches and seizures in the civics classes. He also presents information on drug education and safety at Berthoud Elementary.

“I’m very straightforward with the kids and answer their questions honestly,” Kingston said. “What I tell kids is knowledge is power. The more knowledge I give you, the more power you have to make a good decision.”

Kingston gives presentations at other locations in Berthoud and Larimer County on similar subjects to provide information and relationship-building with the community.

“I’ve been able to build a lot of connections, and I try to bring those connections to the school to help with education, safety and wellbeing,” Kingston said.

Kingston welcomes confidential conversations with the students and will try to help them as best as he can without violating their trust.

“My kids know that when you talk to me, I won’t throw you underneath the bus,” Kingston said.

“They’re very impressionable, growing up and maturing,” Kingston said. “They have an understanding that law enforcement is there to help and assist them.”

Kingston attends weekly meetings with the other SROs in Thompson School District — there are seven total, including four for the high schools and three for the middle schools  — and when it comes to his and Mosley’s turn, they do not have much to report.

Kingston then attended the University of Northern Colorado and earned an associate’s degree in criminal justice in 1997. He became state certified in Colorado Peace Officers Standards and Training through the police academy at Aims Community College.

The year he graduated Kingston was hired on at the Eaton Police Department, where he served until 2000, and while there he became certified in Drug Abuse Resistance Education. He relocated to the sheriff’s office to work for a larger law enforcement entity with more training opportunities. He served as a canine officer with the sheriff’s office for 10 years until around 2014.

“I love my job. I’m very, very lucky,” Kingston said. “This is a great assignment. It’s probably the best assignment I’ve ever had. Knowing I get to come and hang out with kids all day, that’s awesome.”