Day of Kindness line-up set to be the biggest yet 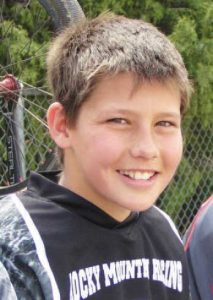 One would have been hard pressed to drive down Mountain Avenue the past six years in late March without catching a glimpse of orange balloons, flags, and painted butterflies – symbols of remembrance in a tight-knit community where every life has an impact.

The orange represents the favorite color of Alex Sabados, a Berthoud teen who, after fighting a heroic battle with pediatric brain cancer, left those who loved him on March 24, 2010. In his short life, Sabados had already managed to touch many hearts through his involvement locally in Boy Scouts, competitive soccer, and BMX bike riding.

After his passing, several community members joined forces with his family to keep Sabados’ memory alive, and to support two other Berthoud youth, Angelo Dabbiero and Zachary Payne Dunkelberger, who were battling cancer at the time.

Berthoud resident Jan Dowker approached the town board with a letter requesting official recognition of a day in Sabados’ honor, and her request was granted. A few months later Sabados’ friends and family took the next step and began planning the first Alex Sabados Day of Kindness.

Although brought about by his passing, those who knew Sabados say it was his life, not his death, that inspired the Day of Kindness.

“Alex was a teenager with a great attitude,” said his mom, Julia Sabados. “He never missed a chance to smile or passed up the chance to treat someone with kindness.”

The mission of the event, according to its Facebook page, @dayofkindnessberthoud, is to “continue spreading [Sabados’, Dabbiero’s and Dunkelberger’s] love and kindness through caring for others, helping everyone in need, and fighting pediatric cancer.”

Over the past six years the event has steadily grown; with more activities, more volunteers, and more money earned to benefit Children’s Hospital Colorado, according to Suzanne Doles, executive planner for Let’s PLANet Giving, the nonprofit tasked with planning the event’s activities. She said this year will be no exception.

The 2017 event is scheduled for March 25 from 9:30 a.m. to 3 p.m., with a rain date of April 1. The annual 5K organized by the Berthoud High School (BHS) student council will kick off the day’s activities at the BHS track.

The Journey of Strength and Hope (J.O.S.H.) program will also be on hand, offering boxing sessions throughout the day, and Berthoud Bicycle Shop has organized a cruiser ride for families.

These activities will take place in addition to returning favorites from past years, including motorcycle rides from American Supercamp and a toy drive to benefit Children’s Hospital Colorado’s oncology department.

Live music will be performed by Brews Brothers Band, and food will be available for purchase from the Berthoud Lions Club.

All children attending Berthoud schools will also receive “kindness pass-it-on cards” at the event, which encourage them to perform an act of kindness and pass the card on to someone else.

Also throughout the month of March the Berthoud library will be collecting non-perishable food items for the House of Neighborly Services, as well as pop tabs for the Ronald McDonald House on behalf of the Day of Kindness organization.

Registration for the 5K is $20/person and can be found at letsplanetgiving.org. Most events throughout the day will be available at no cost.

In 2015 proceeds from Alex Sabados Day of Kindness topped $2000, plus an additional toy donation valued at over $750. Last year, despite poor weather, the event brought in over $1000 to deliver to the hospital.

“We wanted to do something, not only in memory of our son, but also to pay it back to our kind community,” said Julia. “This is an opportunity for organizations to share their kindness and for families to make memories.”

Sponsors and volunteers are still needed for this year’s event. Anyone interested can visit the event Facebook page or call Doles at 970-203-5884.