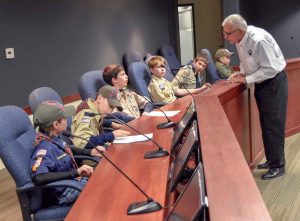 “We are going to learn what the mayor does and how he got to be the mayor,” Craig Wingard said. He explained this is one of the tasks needed to complete the Webelos 2 program and move up in the scouting ranks. Some of the boys in the program will become Boy Scouts in a month or so.

Wingard added it takes multiple adventures to complete the program. The scouts in attendance listed a visit to the fire department, learning flag respect and about scouting in foreign countries, among other things they have learned.

Miller called the mayor to organize the event. During the meeting, Mulvihill complemented Gryphon on his persistence and professionalism on the phone.

The scouts, their leaders, and the mayor went upstairs to the Louis F. Bein meeting room to get to know each other.

“You can always tell everybody that you were the first ones to have a town meeting up here,” Mulvihill told the group.

Later the group reconvened in the downstairs boardroom. Each boy got to sit at the dais in the town board members’ seats.
“The town belongs to all of you,” the mayor told the scouts. He shared with them that he was involved in scouting growing up. Then he fielded a wide range of questions about Berthoud.

These questions ranged from how it felt to be elected mayor, what inspired him to run for mayor and whether he would seek reelection. The young citizens wanted to know about the resources available to sustain the projected growth in the Berthoud area. Later in the meeting Mulvihill also answered questions about the law enforcement in Berthoud.

Mulvihill ended the meeting by giving the Webelo Scouts of Troop 6 some advice. “Get your education,” was the first item he mentioned. He followed this with suggesting they learn a skill, and added to the list to get out and learn stuff and don’t play video games all day.

Troop 6 now knows who the Berthoud mayor is and what he does. And they are one step closer to becoming Boy Scouts.