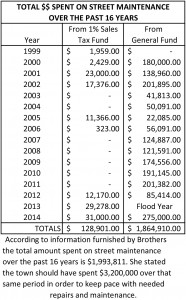 Town trustees viewed PowerPoint presentations during the Oct. 28 board meeting by Town Engineer Stephanie Brothers and Scott Sickler of the consulting firm, Ground Engineering, regarding the condition of the streets and sidewalks in town. The meeting was limited to an information-gathering session for the trustees.

Town Administrator Mike Hart stated the town’s streets and sidewalks had been neglected for nearly 20 years and estimated the amount needed to refurbish both would be approximately $4 million. Hart said the 2015 budget process was not far enough along to give a clear picture of the “shortfall” of funds required to begin the process of rebuilding the street infrastructure over the next five years.

Sickler had thoroughly surveyed Berthoud’s streets in order to accomplish a block-by-block assessment of the condition of the asphalt paving. The results of the survey were transferred to a street map and color coded so the information could be more easily understood. He shared copies of the map with the trustees during his portion of the presentation and backed up his assessment of the condition of the pavement with several photos. The photos showed pavement with widening cracks, potholes, sunken road base which has led to dips in the paving, and, in extreme cases, large sections of asphalt with “alligator cracking.”

Brothers stated the main issues with the pavement in town stem from two major causes: infrequent funding for street maintenance over at least the last 16 years and the fact that pavement sections constructed from the late 1970s until the early 1990s were done with insufficient thickness. The asphalt thickness used to be 2 to 2.5 inches, while the standard pavement thickness for a residential street is currently 3.5 to 4 inches, according to Brothers.

Brothers said that there was a silver lining in that the areas of thin asphalt generally has a thicker road base of six to eight inches which will help mitigate repaving cost.

Brothers said upheaved, uneven sidewalks, as well as stretches of residential lots with no sidewalks adjacent to the street, had become a public safety issue citing the town’s municipal code:

Section 15.11-1 “Whenever the Board of Trustees, by resolution, shall determine that the construction of any sidewalk, curb or curb and gutter, or the repair thereof, is necessary for the public safety, it shall be the duty of the owner of the property adjacent to or upon which the improvement is to be constructed or repaired to construct or repair the same in accordance with the specifications of the Superintendent of Streets.”

Hart stated he was concerned about the town’s liability with regard to the sidewalk issue.

A discussion concerning the installation and maintenance of sidewalks ensued with Trustee Suzie White questioning the section of municipal code cited above.

“You will have people saying, ‘Why should I maintain public property?’” said White, “You’re asking 3,500 people (homeowners) to take care of the sidewalks. We’re going to have to do it. It will never get done by the homeowners.”

Hart stated the trustees needed to develop and stand behind some type of plan to answer, not only the sidewalk issue, but also the question of funding street maintenance projects.

Option 1 – Increase funding from the 1 percent sales tax over the next five to eight years. A positive aspect of this option is that more streets can be repaired or replaced each year. A negative is there will be less money available to fund other recipients of the 1 percent fund.

Option 2 – Increase the Municipal Fee for a limited number of years to cover a portion of the cost. A positive of this option is the 1 percent fund will not be as greatly affected. The negative is, of course, having to increase the municipal fee.

Option 3 – Approve a pavement and sidewalk improvement fee. The positive is a steady stream of capital is provided to maintain and update streets, roads and sidewalks. The negative, adding a new fee.

Option 4 – Approve a bond which would provide capital to fund a street, road and sidewalk maintenance program. This option would require a property tax increase which would need to be approved by voters. The positive aspect of this proposal is that more streets could be improved in a shorter number of years. More bonded indebtedness is the negative.