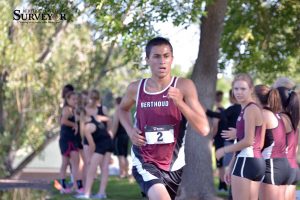 What is a good gift for a team to give a coach when they have a contest on her birthday? A win of course; the Berthoud cross country team gave their coach the first-place plaque they won as a birthday gift. Racing for the first time in two weeks, the Berthoud High School (BHS) cross country team ran at the Loveland Sweetheart meet on Friday. The meet featured a unique format where big and small schools raced against one another in the same race but were scored separately. The BHS boys’ varsity team won the division two (smaller school) team competition.

The course looped around Lake Loveland twice. Most of the BHS team held back a little on the first lap, as the race started very fast. Berthoud’s Elijah Grewal was in 25th at the mile, Ken Kubik around 30th place, Kade Leonard and Josh Doyle weren’t even in the top 50 through the first mile. However, things changed on the second lap, and the members of the BHS team passed many runners.

The Berthoud boys placed six finishers in the top-10 places of division two. Grewal placed 11th overall in the race and was the first finisher in division two with a time of 17 minutes, 39 seconds. Kubik was third with a time of 18:48. Leonard was fourth in 19:22 and Doyle was close behind, finishing in fifth place with a time of 19:27. Zac Marquardt placed eight in 20:08 and Murphy Vogele-Zimmerling was ninth just a few steps back in 20:11. Noah Burtis placed 12th in 20:16. 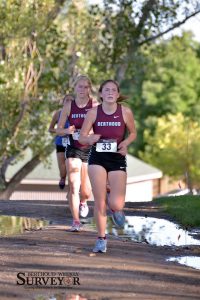 On the girls’ side, Berthoud’s Maycee White led the girls to a third-place finish. The Berthoud sophomore was the only Spartan to place in the top 10. White’s 23:31 was good for ninth place. Sonya Schuppan was 11th in 23:46. Kathryn Mathiesen was 16th in 24:56, Cailey Archer was 19th in 25:37, and Alyssa Radloff was 20th in 25:43. Mountain View High School won the division-two team competition.

The junior varsity boys’ race showcased some fine racing by Berthoud runners. Kevin Sethre finished in 20th place, Collin Pea was 24th and Ty Williams raced to 29th place. Freshmen Siler Stein and Ben Burkett were 42nd and 44th in the race. Unfortunately, an unreliable race official sent the pack the wrong way and the entire group cut off 0.67 miles of the race distance. The times were recorded but are not valid for the 5K distance.

Turner Middle School had an excellent showing in the middle-school division. On the boys’ side, Carlos Gutierrez was the first Turner Dragon across the line, finishing in eighth place with a time of 15:29. Lane Pirkey was 12th in 15:54. Caden Leal-Midgett finished in 27th place with a time of 16:57. Carter von Seggern placed 34th in 17:21. Bill Reed Middle School won the team competition followed by Walt Clark and Lucille Erwin. Turner was fourth as a team.

The next meet for the Spartans will be at Mead on Oct.2. Turner will race at their home meet on Tuesday, Sept. 29, and Windsor on Oct.2. All meets will start at 4 p.m.