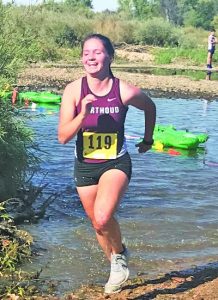 Photo by Kristi Leonard – Daria Degnan races past the alligators in the South Platte River at the Runner’s Roost Invite last week. The girls team finished in third place.

“Coach, is this a joke?” questioned Siler Stein. But it was no joke. The Runner’s Roost race is a true cross country race, going into the woods and through two water crossings. Along the way the runners passed inflatable alligators, sharks and dolphins. Regardless of the folly that seemed to surround the course, the BHS Spartans were focused on racing. Berthoud and Thunder Ridge each placed nine runners in the top 30, not leaving much room for other teams. Thunder Ridge won, and Berthoud placed second in the team scoring. Resurrection Christian finished in third place as a team.

Kade Leonard spent much of the race in fourth place until faltering slightly to finish in sixth. Jonathan Wyrwas, Siler Stein and Kyle Conlon ran close together through the first two miles. Sergey Eggers and Sam Hatton splashed through the water in a line of 10 runners shortly afterward. Dylan Carder was holding onto the back end of that pack trying to keep up. Bryce Mitts and Brent Hoogland were matching strides with three Thunder Ridge runners up the sandy hill out of the water. The terrain of the final mile changed from dirt to grass, favoring the strength runners. Conlon, Stein and Wyrwas switched places with one another but still held off all other challengers finishing 13th, 14th and 15th, respectively. Hatton placed 20th and Carder was 23rd. Eggers, who also plays soccer for BHS, faded to 30th and was passed by Mitts and Hoogland who placed 27th and 28th, respectively. There were 187 boys in the race.

Thunder Ridge overwhelmed the girls race, winning with 26 points. Platte Canyon and Berthoud took the next two team placings. Twenty-three of the top 27 girls were on one of the first three teams. There was a lot of space separating the first girls, so Cailey Archer in ninth place ran the last half of the race alone. The senior started out leading the second pack of girls but left the group at the second water crossing. Julianne Evans Dennison was Berthoud’s second finisher in 21st place. Daria Degnan placed 23rd, Kim Blough was 26th and Kathryn Mathiesen was 33rd. Kaylee Shadle, 45th, felt at home at the Adams County Fairgrounds where the race was held. Shadle trained on these trails when she attended Prairie View High School before moving to Berthoud this year. Emma Lundgreen and Sara Barbolini placed 53rd and 67th. There were 134 girls in the race, 37 of them were from Thunder Ridge.

Berthoud’s freshmen and sophomores had the week off from racing. Berthoud’s young runners will race on Tuesday at the Pat Amato Frosh/Soph meet at the Northwest Open Space in Northglenn.