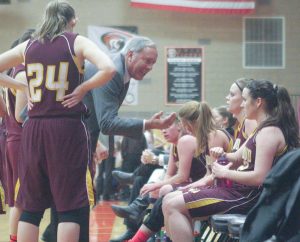 Berthoud girls basketball head coach Randy Earl speaks to his team during a break in the game against Erie last season. The Spartans return a core group of experienced players that will benefit the team this season.
Surveyor file photo

Something that is often over-looked in sports is just how important a team’s comfort and familiarity with one another is. As they prepare to begin the season, the Berthoud High School (BHS) girls basketball team features a core group of seniors who have played together for virtually their whole lives.

The Lady Spartans lost only one player to graduation and thus return a roster of players who have already been though the rigors of varsity competition. That experience is something that has long-time head coach, Randy Earl, excited for the season.

“Experience, they’ve all played so they all know what to expect,” Earl said when asked what he thinks could be his team’s biggest strength this season.

Berthoud senior Kristina Cavey, who took home 2013-14 Tri-Valley Conference (TVC) Player of the Year honors as a sophomore, also mentioned how important her team’s experience will be this year.

“I think it’s a huge advantage, being able to know the style of play we can run, being able to find our roles where we can all best help the team,” Cavey said. “There’s a group of five or six of us that have played together for eight years. Not many people can say that and I think that’s going to be huge for us.”

That experience has allowed Earl and his staff to add some new wrinkles offensively.

“We’ve already started to do more stuff, especially offensively, than what we did last year,” Earl explained. “We’re adding new offense stuff almost daily here, that’s more than what we had last year.”

Earl said the team has responded well thus far but there have been some of the expected growing pains. Earl, who has over 300 career wins as a head coach, said he expects the team to get more used to the schematic additions to the offense in the four practices they have before playing their first game on Dec. 1.

Berthoud begins the season as the one of, if not the, favorite for the TVC title. Berthoud finished last season in fourth place, with a 14-9 overall and 9-5 conference record, in the TVC and just missed the postseason. Yet the three teams who finished above the Lady Spartans – Windsor, Mead and Holy Family – all lost a number of key players to graduation.

“We’ve got more coming back than anybody else does,” Earl said of the TVC. “We’re trying to go one game at a time, but we’ve told the kids that we’re the best team on paper but that doesn’t mean anything, you’ve got to go out and perform night in and night out.”

In addition to Cavey, seniors Taylor Armitage, Lindsay Erickson, Maria Fate, Sydney Kouns, and junior Sarah Howard, return after having played in all 23 games last season. Fate led the Lady Spartans in rebounding average last year, while Armitage was second on the team in both scoring average to Cavey and in rebounding to Fate. Howard and Kouns, according to Earl, will comprise Berthoud’s starting backcourt and, along with Cavey, be the team’s primary ball-handlers.

The embarrassment of riches on the roster led Earl to say, “I think overall that both varsity and JV we’ve probably got more depth than we’ve ever had.”

The Lady Spartans will begin the season on Dec. 1, welcoming Weld Central to the BHS gym. A pair of tournaments, the Manual Early Season Tournament (Dec. 3 through Dec. 5) and the annual Spartan Classic, held at BHS on Dec. 9, 11 and 12, comprise the meat of the early season schedule. Berthoud begins conference play after the first of the year with a trip to Erie on Jan. 5. And for Cavey and her teammates, they are ready to go.

“Our goal is to be undefeated in conference play, but we have to come out here every day with a great attitude and know we can win,” Cavey said. “I have high expectations for us, we’ve been doing this forever, and I think we can go all the way. It will be a challenge, but I think we’re ready for it, I think the mentality is there this year.”