Colorado State Patrol seized over two tons of narcotics in 2021

While their primary role is to keep people driving legally and safe on the roads, in 2021 the Colorado State Patrol (CSP) seized nearly 2 tons of drugs in Colorado. According to CSP Colorado was the top state of origin and destination for drugs followed by California. Narcotic seizures have increased between 70% and as much as 291% in the state since 2017.

CSP enlists specialty units that focus on the protection and safety of the people of Colorado in a variety of ways including pursuing individuals who are transporting illicit items.

“The mission of our Smuggling, Trafficking, and Interdiction Section (STIS) is to relentlessly pursue those who transport illegal firearms, narcotics, illicit bulk US currency and human trafficking victims on Colorado’s highways,” said STIS Captain Bill Barkley of the Colorado State Patrol.  “The pandemic has not slowed the massive amount of narcotics that are coming into our state every day to be distributed to cities all over Colorado.”

Although the total number of cases dropped 3% in 2021, down to 361 cases from 372 in 2020, the Colorado State Patrol’s STIS team actually seized more narcotics (weight/pounds) than any other year within a five-year comparison period; most notable in these seizures were 1,434 pounds of Methamphetamine (291% increase) from 2020, and 151 pounds of Fentanyl powder (403% increase) from 2020 – not to mention the 13,842 fentanyl pills and other drug seizures.

“We are fighting this war on drugs every day in an attempt to dismantle drug trafficking organizations that are smuggling narcotics into our state.  In order to do this, you must seize their deadly drugs and their illicit US currency to stop their operations.  In 2021 seizures have taken nearly two tons of narcotics, 68 illegal firearms, and over 3.1 million in illicit US Currency,” Captain Barkley explained.

Within the STIS seizures, 174 of those seizures originated in Colorado, and 205 seizures were destined for Colorado. Colorado was both the top state of origin and destination, followed by California. 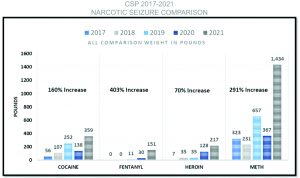 Narcotic seizures in the state have seen a dramatic increase. Cocaine and meth seizures have increased 160% and an incredible 291% since 2017.

Fentanyl, which CSP reported a 403% increase in seizures, in particular, has made headlines in recent days in the state as five adults died from a suspected fentanyl overdose in Commerce City at the end of February. Gov. Jared Polis and state lawmakers are rethinking a 2019 law that made possession of thousands of lethal doses of fentanyl a misdemeanor as overdoses from opioids continue to rise in the state. In 2021 803 people died from a fentanyl overdose in Colorado, up from 520 in 2020.

“Our ultimate mission is to save Coloradan lives from this poison that has already taken too many lives from addiction and overdoses.  The STIS is dedicated every day to this mission,” said Captain Barkley.