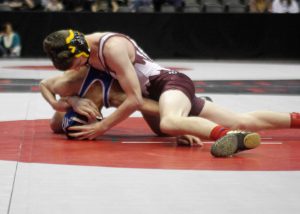 Berthoud freshmen wrestler Colin Leypoldt was 9 years old when he attended a high school state wrestling tournament in Nebraska with his family to watch a friend wrestle on the big stage. That’s when he told his mother, Suzanne Leypoldt, that he was going to be there one day.

“I know that he set that goal a long, long time ago,” said Suzanne. “Years ago, he said he wanted to make it to a state tournament.”

Despite having missed half of his freshmen season due to illness and suffering from associated symptoms of the debilitating Fahr’s disease, the 15-year-old achieved his goal and wrestled on the state’s biggest stage in front of the Pepsi Center crowd this year.

Colin began wrestling at the age of 6 after a family friend noticed he had a natural ability, according to Suzanne.

“I was babysitting a friend’s little girl, and her dad was an avid wrestler who had wrestled in high school and college. When the father would come and pick up the little girl, he would wrestle with the boys,” Suzanne recalled. “He would say, ‘gosh, these guys are just naturally talented, you really should get them in wrestling.’”

“He has a lot of ability in wrestling, it just depends on if he’s having a good week or bad week,” Pickert said.

Colin’s father, Nick Leypoldt, didn’t wrestle, and it wasn’t the first sport that came to mind for their boys, but they rolled with it.

“His first season was a little rocky,” Suzanne said. “Didn’t win much; cried a lot.”

Colin improved during the second season, finishing in first or second at all 15 duals that he wrestled in that year. He was also named the most improved wrestler.

“It was good,” Suzanne said. “And he’s never stopped since then.”

In 2011, when Colin was 11, after eight years of wondering what ailed their son, the Leypoldts were told that Colin and their two other sons, Brock, then 9, and Dawson, then 5, all had Fahr’s disease.

“[Colin] always had weird symptoms that nobody could explain,” Nick said. 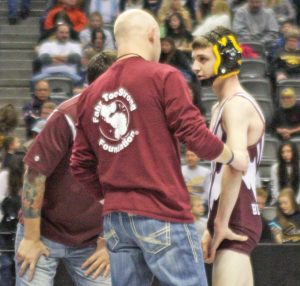 Colin Leypoldt speaks with his coaches during a match at the state wrestling tournament in Denver on Feb. 20.

Colin suffered from “surprise pain,” Nick said, so severe Colin would pass out and stop breathing at times. They had an internal heart monitor placed, underneath the skin next to his heart, to track his heart rhythm when Colin was 9. Doctors recorded times where Colin’s heart stopped briefly, but “they always said it would come back,” Nick said.

That went on for a number of years, and Colin continued to wrestle. They met with neurologists, and then with a cardiologist, then back to the neurologist, without answers until Colin had an MRI at the age of 11 when doctors discovered one peculiar spot in the basil ganglia, Suzanne said. They set a follow-up appointment for one year later to see if the spot changed. During that year, the Leypoldts moved from Bellevue, Neb., to Berthoud. That’s when they first noticed similar symptoms in their son, Dawson.

They saw a neurologist at Denver’s Children’s Hospital where for three months they performed a variety of test on the boys. That’s when the Leypoldts were told their boys were three of 31 people in the world on record affected by Fahr’s disease.

All three of the Leypoldts’ sons, Colin, now 15, Brock 13, Dawson 9, have all been diagnosed with Fahr’s, otherwise known as Idiopathic Basal Ganglia Calcification; an extremely rare neurological disorder characterized by abnormal deposits of calcium in areas of the brain that affects body movement, according to online reports.

Symptoms include deterioration of motor functions, speech, involuntary movement, and even seizures. Other symptoms include headaches, dementia, vision impairment, fatigue, slow or slurred speech, and muscle cramping. There is currently no cure or standard course of treatment for Fahr’s, according to reports.

“We’d been hoping for so long for a diagnosis that when we finally got one, we were in the same spot,” Nick said. “But at least we know why it’s happening.”

As difficult as it was to hear the diagnosis, hearing that there is no cure or treatment was even more of a blow.

“It was hard to hear,” Suzanne said. “It was harder to hear them say there was nothing they can do for them; it was like, that can’t be it.”

Colin sat quietly in a chair in the Berthoud Weekly Surveyor office as he and his family spoke about a typical day for Colin. One of the things this disease it taking from him is his ability to speak and communicate, Suzanne explained. It’s gotten progressively worse over the past few months.

“What’s tough about it?”

“Random pain throughout the body?”

Colin often has to take a nap to make it through the school day; then comes wrestling practice. It was a big difference wrestling at the high school level, but Colin was up for the challenge.

“It’s a bigger stage,” he said; more challenging and better competitors. The best part of the season for Colin was competing at the state tournament. He said it was, “Just fun.” A goal set at a young age achieved.

Colin made the tournament after having missed half of the season due to illness and from symptoms of Fahr’s. He spent the first week of the season hospitalized by the disease, according to his mother, then returned to the hospital a second time before coming down with the flu during the Christmas Classic Tournament in December.

“Literally, from Thanksgiving to Christmas, he spent most of it in the hospital,” Suzanne said. “He really didn’t hit the [mat] until after Christmas.”

Even then he had a tough week, suffering multiple seizures before a weekend dual. Colin called his coach and asked if he could still wrestle that weekend – he did.

“He’s determined, he enjoys wrestling and wants to do as well as he can do; for him and for the team,” Pickert said. “Occasionally, this disease will hold him back a little.”

Colin managed to wrestle his match that day but ultimately lost and had to be carried off the mat after exhausting his body.

“He went out there and gave it the best he could,” Nick said. “He still walked onto the mat.”

During several matches this year, by the end of the match, Colin’s arms were numb due to his condition, but he trudged on and finished the matches anyway.

“That’s a challenging thing to try and overcome,” Suzanne said. “That’s a challenge in itself when he’s telling his arms, ‘Ok, do this’ and they’re not responding the way he wants them to.”

Reflecting on his season that ended in a 20-15 record, Colin remembers his best match against the No. 7-ranked 106-pound Adam Evertz of Erie.

“I came back from behind to pin [Evertz],” Colin said of that match. “End of the second period, I took him down, then I pinned him.”

Evertz ended up taking first at the 3A northern regionals in Eaton to qualify for the state tournament.

“So we know he can beat the best,” Nick said, “he just has to mentally do it.”

It was a tough match for Colin, but for Suzanne, they’re all like that. 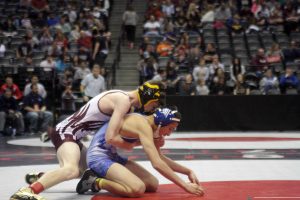 Colin was focused on the day at Regionals. He wrestled four matches and split them, 2-2, qualifying for the state tournament. Colin lost the third-place match to Luc Herrera of Faith Christian, but rebounded to take fourth place by besting Brush’s Caleb Cox.

When Colin stepped on the podium in Eaton, after placing fourth and qualifying for the state tournament, his family witnessed Colin reach a goal he’s wanted to achieve for a third of his young life.

The state tournament isn’t always about winning. Colin enjoyed the experience despite first and second round losses, and he’s already looking forward to next season – and competing at another state tournament.

“He is determined to do well and willing to overcome what he can to be successful,” Pickert said.

Making it to state this year is testament to Colin’s determination and character. For his parents, the accomplishment wasn’t lost on them. Just being there, watching their oldest son compete at a high level at a sport that he’s loved since a young age, was a gift. And a moment they’ll never forget.

“It didn’t matter if he won or lost at state, you know? It was getting there that was the goal; that was the purpose,” Suzanne said. “Having him up there on the podium in fourth place at regionals, it was definitely like, yes, he did it.”

For more information about the Leypoldts visit their Facebook page.