Does the idea of going for a run, then sitting down with a cold craft brew sound like fun?

Then head to City Star Brewing at 6 p.m. on Thursdays for the Berthoud Social Run to meet with other runners, walkers and the like for a one-mile or a 5K run. 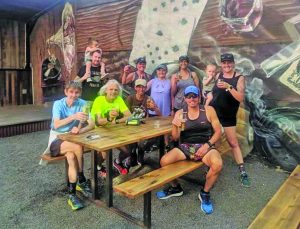 Avid runner Steve Byers, owner of EnergyLogic, Inc., approached Way about hosting a run with a beer special, something the brewery has done in past years with the last one in 2017. The special this time is $3 for a 12- or 16-ounce beer at half off the regular price, offered to participants following the run—participants, however, are not required to make the purchase.

“For us, it takes having some inspired community members, and Steve has taken the charge,” Way said, adding that the brewery also coordinates runs with some of the community events it hosts or participates in, such as Hops and Harley and the Beer Chase.

The Berthoud Social Run, launched in August, starts outside the taproom and follows various routes through town on streets, sidewalks and trails.

“There’s a few different options, and we’ll change it up here and there as well,” Way said.

Participants can walk, run, have a stroller or bring a dog, and they can run individually or in pairs or groups. The attendance ranges from two to 12 people, though Way hopes to see it increase to at least six, she said.

“The more people that do it, it’s kind of fun. The more the merrier,” Way said. “It’s not about running fast or running a certain amount. It’s about being together.”

At this point, Way and Byers plan to continue the run year-round, though individual runs may be cancelled due to weather or during the holidays. Updates will be posted at City Star Brewing’s website at citystarbrewing.com and on its social media channels.

The run fits with one of the brewery’s core values, which is community, Way said.

“Hosting events like this is at the heart of what we’re about,” she said.

The event is a positive way for people to interact in person after a year of not being able to do so, Way said. It’s also a way to encourage people to be physically active, gets the heart rate up and has other physical and mental health benefits, she said.

“Doing it in a communal fashion is positive,” Way said. “It’s always fun to get to know people in a new setting, other runners and locals who are into being active and would like to enjoy craft beer together.”