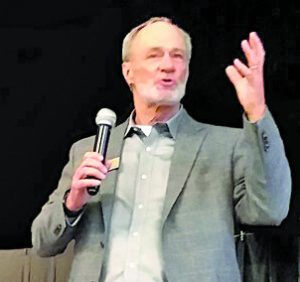 Winn, a retired Navy captain where flight surgeon in the Western Pacific and all over Asia, said, “As a physician, I practiced evidence-based medicine. As a legislator, I’ll practice evidence-based policy making. It is a data-driven process on a foundation of facts and science producing measurable outcomes.”

Winn, who has lived in Colorado since he retired from active duty in 1975, rejects partisan platitudes and talking points, saying he focuses his efforts on trying to affect measurable change in a rational, common sense fashion. “I was seeing what appeared to be dysfunction in the people’s house, the U.S. House, they’re spending all their time fighting each other and not doing the people’s business.”

The good doctor understands that while second congressional district is a “blue” district and incumbent Joe Neguse, of whom Winn was largely complimentary, is the favorite in the race, he sees, at the very least, an opportunity to move the discussion of key issues forward.

“As a physician I am upset the Americans are not the healthiest in the world,” Winn said, “that cannot stand and should not be.” Winn said he calls the proposed nationalized healthcare plan supported by Neguse and other Democrats, “Medicaid for All,” as it is a more-apt description than the preferred “Medicare for All,” used by supporters of the single-payer plan.

“The way we deliver health care is too fragmented, there is no continuity of care, we need to have patient-centered health care,” Winn said and stated he was initially opposed and remains opposed to the Affordable Care Act, often called “Obamacare.” Said Winn, “it did not make Americans healthier nor did it lower costs … costs of healthcare are rising faster than inflation and we need to stop that.” Winn states, “What politicians should be doing to reform the insurance system is to make adjustments, such as tort reform, to allow for insurance companies to compete for the best coverage at the lowest price.”

Winn takes a similar approach on the other matters he says he and constituents with whom he has spoken identify as the most-pressing including the COVID-19 pandemic, economic recovery, climate change and higher education. He was very complimentary of the work done in rapidly developing therapeutics to treat the pandemic, saying the public-private partnerships created virtually overnight are a testament to the American ability to overcome any challenge we face so long as we hard and work together.

Winn supports school choice, saying that he wants every single young person in the country to have access to a quality education but that it should not be limited by their zip code. He supports the use of alternative energy production such as wind and solar but is also a proponent of nuclear energy.

“We need to protect this big beautiful planet but I do not agree that just going to wind and solar is the only way to do it,” Winn said and pointed to his advanced study in nuclear energy saying,
“The fourth-generation thorium reactors can give us unlimited power without CO2, they are much safer than the light water reactors we’ve been using, they can be built modular and they can  provide carbon free power.”

Winn rejects the idea that there is widespread, systemic racism across America. He acknowledges the county is not perfect but has come a long way since the Jim Crow era and points to Congressman Neguse as an example of the progress the county has made. Said Winn, “My opponent is a perfect example of where America has come, I really admire what he has done, we nee to build on that. I reject this idea that here is systemic racism, my opponent is a perfect example, a first-generation immigrant who has risen to be a representative.”

Winn is very optimistic about the future, saying that challenges can be overcome by Americans working together. “The world will not come to an end I the next 10 years, I consider climate change a challenge, not an end of the world, yes, we’re going to get through COVID but we have to come together, stop the negativity. We have an incredible future ahead of us. This is going to be the greatest century ever, but only if we have leaders who can take us forward and now dwell on the past,” he said. “Climate change is a challenge we can address, COVID is a challenge we can all address, we’ve been through challenges before and we can come together and get through the challenges we face today and will face tomorrow.”