Characters come to life during author studies at Berthoud El 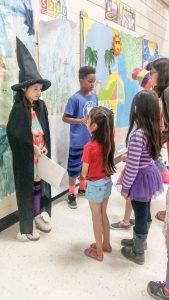 Fourth graders Katrina Riguito, dressed as Hermione Granger from the Harry Potter series, and Zane Buckley, dressed as Kyle from Escaping the Giant Wave, present their author studies projects to other Berthoud El students and families Wednesday, as part of their final reading assignment.
Katie Harris / The Surveyor

A month’s worth of work came to fruition Wednesday, May 25, as Megan Courtright’s class of Berthoud Elementary fourth graders presented their author-studies projects for the rest of the school and their families. For the students, the event was a gratifying way to end a school year of hard work.

Back in April, Courtright had the fourth graders choose two books written by the same author. They spent the past month reading both books then writing essays with three purposes: to introduce the author, compare and contrast, and persuade their audience to read works by their author.

On Wednesday, the students dressed up as their selected author, or as a character from the books, and created a backdrop from one of the scenes. They then presented their books and answered questions from the audience while remaining in character.

Kailey Guzman, who dressed as America Singer from “The Selection” series, showed up in style with a fancy blue ball gown and matching blue chaise lounge chair she borrowed from her younger sister’s bedroom. Guzman explained to her audience that “The Selection” is the story of a young girl from a poor family who loves to play instruments and, when she wins a musical competition, has to work hard to fit in with the other musicians.

“The project was so much fun!” said Guzman. “Getting to write about the story in my own words and tell people about it was my favorite part.”

Another intriguing presentation was that of Zane Buckley, who read the book, “Escaping the Giant Wave,” and dressed up as the main character, Kyle.

“It’s about a kid and his sister who live in a hotel room while they’re on a cruise,” said Buckley. “A tsunami and earthquake cause a fire to break out and Kyle and his sister have to seek high ground.”

Some of the other characters featured Wednesday included Harry Potter and Hermione Granger, Prince Caspian from the “Narnia” series, Alex Rider from the “Alex Rider” series, and Soren from “Guardians of Ga’Hoole.”

Courtright said the thing that surprised her most about the project this year was the large amount of positive feedback from parents.

“I hear about the excitement the kids are coming home with,” she said. “That shows me that they are really enjoying it.”

As her students move on to fifth grade, Courtright said she hopes they take something with them from their final reading assignment.

“I would like them to realize that they are capable of large, seemingly overwhelming projects if they break them down into chunks,” she said.

Another aspect of the project had to do with character building and helping the kids understand that how they portray themselves to others matters.

Courtright explained that nurturing a love of reading was the most important thing and the focus of the project. “I want them to see what they can do with books!”