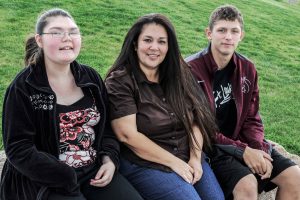 Heidi Purdy, left, sits next to her mother, Angie Purdy, and brother, Noah Purdy, at Pioneer Park in Berthoud on may 16. Heidi and her family and friends will celebrate her 18th birthday this weekend at Pioneer Park.

On May 16, 1999, Angie Purdy said goodbye to her then 2-year-old daughter, Heidi Purdy, after deciding to turn off the ventilator that had kept Heidi alive for more than a week.

Doctors at Children’s Hospital in Denver advised Angie that Heidi would not make it to her third birthday, which was just a few weeks away.

Angie called her family and friends and notified them of the decision. Several of them came to be with Angie at the hospital. They prayed for Heidi.

At 3 p.m., the ventilator was turned off and Angie went across the hall to a “grieving room” for families who’ve recently lost children.

“I was sick beside myself,” Angie said, remembering the day vividly.

She remembered eating a sandwich that night; it was the first time in more than a week that she’d eaten. Then, she slept; another activity that was elusive in the days after Angie and her family were involved in a car accident that took the life of her husband, Jason Purdy, and put Heidi in a coma. Miraculously, Angie and her then infant son, Noah Purdy, were uninjured.

The morning after the ventilator was turned off, Angie woke with a jolt and walked in to the hall to see Heidi’s neurologist walking toward her.

Heidi turned her head and looked at her mother.

According to Angie, doctors had no medical explanation for Heidi’s recovery. She spent another three months in the hospital and underwent several surgeries.

“It was a crazy time,” Angie said. “And she came out of it very miraculously, actually.”

May 8 was the 15th anniversary of the accident that took Jason’s life and severely injured Heidi. Angie has never forgotten the emotions of that day.

“I remember the excitement I felt about introducing my husband and kids to this side of my family,” Angie said. Many of her extended family hadn’t met her immediate family at that point.

“It was going to be a day of introductions of sorts,” Angie said.

She and her family were attending a family wedding in Denver that day, but they never made it to the ceremony.

“I remember the anticipation of getting ready and being excited to meet my family at the hotel before the wedding,” Angie remembered.

She dressed Heidi in her favorite blue dress, which Heidi picked out herself, and fixed Heidi’s hair with curls and butterfly clips.

“She looked just like a little princess,” Angie said.

Angie drove that day. Jason was in the passenger seat. Behind Jason sat Heidi and behind Angie sat 3-month old Noah.

The day’s events are etched in Angie’s memory. As they drove to the wedding venue their car was struck on the passenger side as Angie attempted a left hand turn.

She immediately knew that Jason was gone. She said that emergency medical technicians were able to revive him, but he ultimately died a few hours later at the hospital.

Heidi suffered severe traumatic brain injury from the accident. She was in a coma for three weeks and remained in the hospital for three months. In the 15 years since the accident she’s undergone 27 surgeries and will undergo number 28 in July. Angie says that surgeries are just a part of her daughter’s life.

Life after the accident and subsequent hospital stay, Angie focused on raising her kids, not wallowing over the loss of her husband.

“If you think about the ‘what-ifs, it can make a person crazy,” she said.

She said that she looked at the situation as the cards God’s dealt her, “and that’s what I have,” she said.

There have been days of guilt and days where she’s questioned God’s plan, but she’s always chosen to live positively, and to be a positive role model for her kids.

“Would I like it to be different? Absolutely,” she said. “I want my husband here and to have that complete family again, but that’s not my world. This is my world.”

She said that it wouldn’t be fair to her children to wallow in her own self-pity. She wanted them to have a quality and positive life, despite the accident.

“Just because you’re dealt that kind of hand doesn’t mean that you can’t thrive,” Angie said.

Thrive the way that Heidi has despite doctors telling Angie that she wouldn’t be able to do many things after the accident.

“There is a reason she’s supposed to be here,” Angie said. “She’s really a joy to be around. She’s a very loving child.”

On May 16, Heidi sat patiently on a large boulder positioned on a hillside at Pioneer Park. She sat beside her mother and her brother, as a photographer took photos of the family.

“Am I free to play?” Heidi asked her mother politely after the photos were taken.

“Yes, you can go play,” Angie said as Heidi took off toward the playground.

“She loves the park,” Angie said.

While in the hospital, Heidi developed a love for the card game “Uno.”

“She can play morning, noon and night,” Angie said. “That is her most favorite game.”

Angie used the game as a tool for Heidi to relearn her colors and numbers after she came out of the coma. Heidi had to relearn everything; how to talk, how to walk, and even how to learn.

At the age of 2, Heidi loved to dance.

“She would walk on her toes all the time, like a ballerina,” Angie said.

And Heidi still loves to dance. In April, Heidi danced the night away at the special- needs prom hosted by Brookside Gardens and organized by Grace Place.

“She’s conquered everything that they said she wouldn’t be able to,” Angie said. “So, they don’t tell me what she can’t do any more.”

Today, Heidi is a very much a typical teenager; she’s very social and is also very sensitive to other people’s feelings.

“She’s kind of like me,” Angie said. “If you’re crying, we’re going to cry along with you.” It doesn’t matter if the tears are of joy or sadness.

Heidi enjoys singing and listening to music and simply enjoys the company of others.

As many will attest, she’ll most likely offer a high-five when she sees them.

On June 3 Heidi celebrates a huge milestone in her life; her 18th birthday. For Heidi and Angie, the day is so much more than the typical rite-of-passage milestone celebrated when kids finally become legal adults, it truly is a celebration of a life that almost wasn’t.

On the ride from the auto accident to the hospital, Heidi actually died, Angie said, but technicians were able to revive her.

Her family and friends will celebrate Heidi on Saturday, May 31, with an event at Pioneer Park in Berthoud. Angie expects close to 300 people to attend and invites anyone who’s met or knows Heidi to stop by and say hello.

“I thought that it should be celebrated in a way that she is truly a miracle,” Angie said.

There will be a DJ, food provided by the Bums of Berthoud, and many positive people.

“I have so many different emotions,” Angie said. “I’m thankful that she’s with me. We are really celebrating her life, and that’s why we’re calling it a celebration of life.”

Heidi requests people donate games of Uno for her birthday; she’ll in turn donate the games to the Children’s Hospital.

“She wanted everyone there to be able to play Uno,” Angie said.