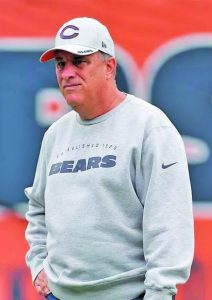 As the league moves toward younger coaches with offensive backgrounds, many of whom incorporate a lot of college concepts into these new-look offenses that are flooding the league, our local professional football team announced late Wednesday morning the decision to hire 60-year-old former Chicago Bears defensive coordinator Vic Fangio to be the 17th head coach in team history.

Fangio has never been a head coach at any level, including at the high-school level where he got his first coaching job in Dunmore, Pa., in 1979. Fangio got his first NFL coaching job in 1986 with the New Orleans Saints, where he remained as a linebackers coach until 1994. Fangio has since worked as a defensive coordinator for the Carolina Panthers, Indianapolis Colts, Houston Texans, San Francisco 49ers, and the aforementioned Bears, with a quick stop in Palo Alto, Calif., in 2010, where he ran the defensive unit for the Stanford University football squad.

Fangio replaces Vance Joseph, who was fired last Monday after back-to-back losing seasons as Denver’s leading man. Both Joseph and Fangio have defensive backgrounds and are coaches who are widely loved by their players. But the similarities between the two end there. Fangio has a far more gruff and brazen personality, a stark contrast to Joseph’s polite and low-key demeanor. Combining his various stops in the NFL and at Stanford, Fangio has been a defensive coordinator for 22 years, compared to Joseph’s single season wearing the defensive headset.

Still, the decision to hire Fangio is a questionable one for the Broncos’ leadership, including football operations president and general manager, John Elway, who are facing a make-or-break decision with this hire.

It is not surprising to see the team opt for someone with decades of experience after being burned by the relatively inexperienced Joseph. Yet, Fangio has interviewed multiple times for head coaching positons in the past, but has never been hired. The bridesmaid-but-never-a-bride aspect of this hire can be taken in two ways. Perhaps Elway and his head coach search committee, which, for reasons unbeknownst to yours truly, included the team’s public relations chief, Patrick Smyth, see something in Fangio prior teams for whom he interviewed missed. Or perhaps those teams saw things Elway and company missed that were red flags.

The organization will attempt to sell the Fangio hire by presenting him as an experienced voice, a strong leader, and someone who can get the most out of the team’s defensive unit, which has a few pieces remaining from the Super Bowl 50 unit, widely regarded as one of the best in league history.

When asked why the Broncos opted for a 60-year-old head coach when so many teams are having success with coaches in their 30s, the Broncos PR team will quickly point to three names – Bill Belichick, Pete Carrol and Andy Reid – highlighting the success those teams have with coaches who are eligible or close to eligible for Social Security benefits.

The difference, however, is those three have decades of experience as head coaches. Reid has led two NFL teams for a combined 19 years, Carrol, in both college and the NFL, for 22 seasons and Belichick, including his five-year stint as Cleveland’s head coach, for a whopping 25 seasons.

Perhaps most interesting and unconventional about this hire is Fangio will likely serve as something of a co-head coach along with Gary Kubiak, who ESPN’s Adam Schefter is reporting will rejoin the Broncos coaching staff as an offensive coordinator/assistant head coach or something similar. Kubiak has been on the Broncos coaching staff for all three of the team’s Super Bowl victories, but there is some concern Kubiak’s offense is antiquated. The Fangio-Kubiak paring brings the experience to avoid many of the rookie mistakes Joseph made, but there is also concern the Broncos might be trying to play 1990s football in 2019.

Time will tell whether going in a direction many see as countervailing to the league’s current trends works out. Yet, one thing is certain, given Fangio’s personality, his weekly media availability should be darn entertaining.