By Surveyor staff
The Surveyor 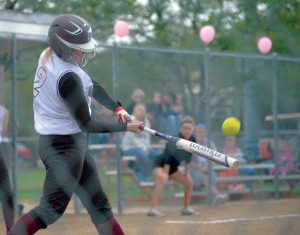 Berthoud’s Jessica Boruff knocks one out of the park during a game this season against Windsor. Boruff had a strong senior season which earned her a first-team all-state selection this year.
John Gardner / The Surveyor

Berthoud’s Jessica Boruff and Taylor Armitage were selected by the Colorado High School Athletic Association as members of the 4A 2014 all-state teams.

Boruff, the Spartans’ senior outfielder, finished the season with a .522 batting average and a .616 on-base percentage, with 31 runs scored on 36 hits, and 33 RBIs, according to Maxpreps. She added six home runs this season as well. Boruff signed a letter of intent to play softball for Colorado Mesa University in Grand Junction, Wednesday afternoon.

Armitage was a standout pitcher during her junior season. She recorded six wins and six losses in her 12 starts this season; having pitched 81 innings, she recorded a .231 opponent batting average with a 3.11 ERA, and 85 strikeouts, according to Maxpreps. At the plate Armitage recorded a .538 batting average, scored 33 runs of 43 hits, and drove in 31 RBIs, according to Maxpreps. She also hit five home runs.

For more information on the selections visit  chsaanow.org. 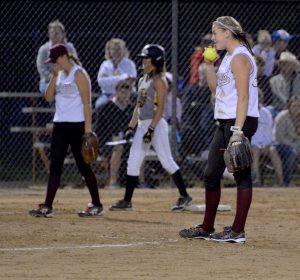 Berthoud’s Taylor Armitage was a force on the mound for the Spartans this season. Her performance earned her a second-team all-state selection from CHSAA.
John Gardner / The Surveyor

Editor’s note: This story has been updated from an earlier version. Stats for both Boruff and Armitage have been updated to reflect the most accurate season totals from Maxpreps.