At the regular meeting of the Berthoud Board of Trustees on Tuesday night, the board listened to feedback from citizens regarding the Newell property on the east side of town, was presented with the preliminary development plans for the proposed 481 home development named Trails at Creekview and saw updated design plans for the redevelopment of Town Park.

Residents appeared in numbers to address the board early in the meeting regarding designating the Newell Farm area on the eastern side of town along Mountain Ave. as a protected space that will remain farmland, or such thereof, for use for concerts, open space and the like. 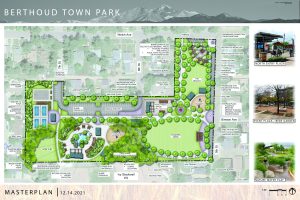 Surveyor contributor Mark French spoke of the Newell family as “pillars of the community,” and called the request a “unique and rare opportunity.” French’s comments were echoed by others who spoke, as well as those who wrote letters of support to the board. Promises were made that the land would remain open space for public use, “would not be sold to commercial” developers and would remain part of the heritage of the town. The board was complimentary and supportive of the proposal but official action was not taken.

The board later heard details regarding the proposal by the TB Group for the development of what is called the Trails at Creekview neighborhood, located on Berthoud Parkway south of the Rose Farm and Hillsdale developments, that calls for 481 single family homes on just over 141 acres.

The development conforms to the requests laid out in the development code and town master and strategic plans regarding trail connections, parks and open space and other matters. Despite the plans submitted by the developer, there were quibbles from trustees regarding some details of the plan.

The developers remained adamant that the proposed development plans met all requirements, and then some, from design standards, trail connections and necessary infrastructure and in requiring only single-story homes. Mayor Will Karspeck opined that such inquires assure public feedback is heard. After much discussion, the preliminary plat was approved with a unanimous vote followed by a five-minute board recess.

The board then heard a presentation from Deputy Town Administrator Jeremy Olinger regarding the proposal for the Town Park redevelopment. Olinger presented plans by the OLC consulting team contracted by the town who reported, in information presented in the trustee’s packet, OLC has met with members of the Berthoud Historical Society (BHS), (Parks, Open Space, Recreation and Trails) PORT committee, as well as staff to come up with the most current design concept for the park attached. BHS members spoke to the history of the park and provided valuable background to start the creative design process. PORT members were very supportive of the plan overall.”

The proposed concept differs from the one proposed in the 2018 initial concept. While the design differs, the proposed plan presented on Tuesday stays true to the proposal that the park remain a central gathering place suitable for many town functions as well as daily outdoor activities.

The proposal, depicted in the included rendering, will, “leave as many healthy trees as we can,” according to Olinger and will create activity areas, more passive activities in the east (such as open lawns, food truck locations, covered picnic areas, a fire pit, garden space and a stage are suitable for concerts) to more active activities in the west, including tennis, basketball and, potentially, pickleball court space. The western portion will also use the existing swimming pool underground infrastructure to create an outdoor water feature with a treehouse and nature theme with adjacent adventure playground amenity included.

Some residents addressed the board to express concerns with some the design concepts. One resident addressed the issue of pickleball and basketball courts potentially being included in the park, citing noise the games create from “sunup to sundown, all day, every day,” which Olinger, prior to public comment, acknowledged may not be ideal due to said concerns from those living near the park. The trustees were largely supportive of removing said amenities from the design concept.

Trustee May Soricelli, while exceedingly complimentary of the proposed design plans, suggested the town solicit formal feedback from residents given the historic nature of the location and its generations-long impact on the downtown character of the town. “I think if we put this back to the community, more than just a posted meeting … have a forum or online survey … so they have buy-in, I want us to move forward together,” she said. Trustees Mike Grace, Tim Hardy, Maureen Dower and Mayor Karspeck argued against soliciting further public feedback, citing prior surveys conducted as well as the approval of the PORT committee. The board voted unanimously to approve the design concepts absent the pickleball courts on the western end of the property.

The next regular meeting of the Berthoud Board of Trustees will take place on Jan. 25.