Alfred G. Bimson was Berthoud’s blacksmith from 1890 to 1945. Since Bimson’s “Stone Shop” at 226 Mountain Ave. had long been recognized as one of the community’s iconic buildings, in 1977 it was purchased for use as the Little Thompson Valley Pioneer Museum.

In 2014 the Berthoud Historical Society embarked on a project to create an entry to the Pioneer Museum that was inspired by Bimson’s ornamental ironwork. (Bimson shifted from shoeing horses and sharpening plows to decorative ironwork in the 1920s.) Today 32 feet of hand-wrought iron fence and two gates patterned after Bimson’s original iron work form the entry to the museum’s Pioneer Courtyard from Mountain Avenue.

What was Bimson’s background in Berthoud? On the 50th anniversary of 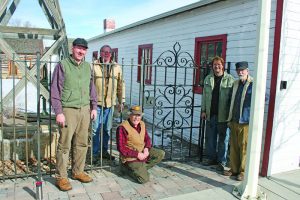 The crew of experienced blacksmiths assembled by David Norrie to work on the Bimson gates in 2015 and 2016 included (left-to-right): Darin Bess, Dick Spiess, Scott Kretschmer, Norrie and Dan Nibbelink. The gates will be dedicated in a ceremony at the Little Thompson Valley Pioneer Museum on Saturday, July 8 at 4 p.m. The public is invited.

his arrival in Berthoud the local newspaper published his recollection of the town’s early years. In 1940 Bimson wrote, “The town they said was nine years old, it having been moved from Old Berthoud. We came from Quincy, Illinois, where we were born. Before coming west I worked in Quincy in shoeing shops where they did nothing else. I worked in a plow factory, and also another factory operated by the Famous Manufacturing company, makers of jail gratings, horse and steam hay presses. The power presses were largely for the South American trade. My work while with the company was in the building of power presses. At that time the company was building a large plant in Hammond, Indiana, and I was offered the foremanship of the blacksmithing department in the new factory. Mrs. Bimson did not want to go to at what that time was a factory town, so I remained with the company until the plant was moved to Hammond, after which we started west.

“We landed in Berthoud on September 12, 1890, and as I had long wanted to open a shop, soon after my arrival I bought a frame building just west of my present stone shop which I started building in 1893 and finished in 1894, there having been a stoppage of building on account of the 1893 panic. In the spring of ’93 it was very dry and for six weeks we ran five forges, and during that time we never had fewer than 80 plow lays in the shop at any time, and often as many as 160 lays for sharpening and ‘turned off’ all the other work that came.

“After the stone shop was completed we had as many as eight horses in it at one time being shod, with twelve to fourteen out front waiting their turn.

“There was no Johnstown or Mead at that time, and that made Berthoud the center of a wide area. Fifty years ago, Berthoud had board walks and trees along the front street with hitching posts. A few years after we came oil street lamps were installed.

“Once in a while one would see some ox teams pass through Berthoud. Some were brought to me for shoeing, but I turned such jobs down for an ox must be thrown or hoisted in a sling for shoeing.

“One change I am pleased to note is that many of those who came to the shop in the old days did a great deal of swearing, letting out great oaths, while now one seldom hears an oath…In the old days I worked from twelve to fourteen hours a day and weighed 181 pounds, while now I do not work very hard and weigh only 153 pounds.”

Another change Bimson would be pleased to note is the new wrought-iron fence and gates that flank the shop he constructed in 1893.

The project got underway in 2014 when Berthoud Historical Society President Mark French enlisted local artisan, blacksmith David Norrie, to design and lead a volunteer effort to hand-forge the fences and gates. That year Norrie oversaw the work of nearly two-dozen local volunteers who hammered out 32 feet of wrought-iron fence that was installed at the museum’s entrance on Mountain Avenue.

In 2015 and 2016 Norrie shifted the work to a group of experienced blacksmiths that included Dan Nibbelink, Dick Spiess, Darin Bess, Scott Kretschmer, and himself. Norrie’s gate design was based on snapshots of intricate iron gates fabricated by Bimson in the 1930s. By early 2017 the fence and gates were complete.

The Bimson-inspired fence and gates will be dedicated in a ceremony on Saturday, July 8, 2017, at 4 p.m. Bimson’s great-granddaughters and patrons of the project, Barbara Bimson Girand, Pamela Bimson Reade and Margaret Weinold Johnson will be in attendance. The event is open to the public.