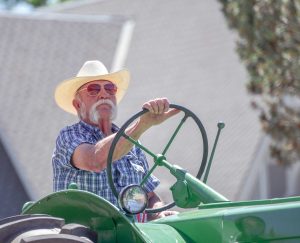 Berthoud resident and agriculture aficionado Bill Markham is photographed driving a tractor during the 2016 Berthoud Day Parade in June.
Markham is a prominent local figure in the agriculture community and is also a champion to the 4H kids that raise livestock for auction.
John Gardner / The Surveyor

Within the Berthoud community, the term 4H is synonymous with four things: service, leadership, agriculture, and Bill Markham. Indeed, those who know the owner of M & M Farms know he’s an avid supporter of agriculture in the local community, and he’s passionate about 4H and the kids behind it.

Markham first became involved with 4H in 1954, when, as a kid, he showed at the Larimer County Fair for the first time. Since then, he’s mentored his own children through the program, all of whom are now on agriculture-related committees, and will watch his 10- and 12-year-old grandchildren compete this year. He said he’s never missed a fair in 62 years.

“The thing I noticed many years ago is that Berthoud kids have a tough time in the sale,” said Markham. “Loveland and Fort Collins kids had a lot of sponsors, but the Berthoud kids never seemed to get as much money as everyone else did.”

Markham said he wanted to help, so he decided to become an order buyer.

“I started contacting businesses, and I’d go and buy for them at the Junior Livestock Sale,” he said. “A lot of businesses don’t have time to go out and buy, but they love it when the kids come in and give them a picture of the animal and personally meet them afterward. That’s been the highlight that’s made the sponsors come back every year.”

Markham said it’s been hard work going out and recruiting sponsors, but he gets a few more each year. He said this year has been the most successful yet.

“I go to local businesses and ask if they’d like to participate, and ask how much they’d like to spend,” said Markham. “I put together a whole card file of the businesses that I buy for. I can tell you right now, I’ve got a pretty good stack of cards.”

Markham said one business in particular gave him a hard time every year about putting up money for the sale, until finally, a few years ago they gave in.

“They finally agreed to give me a little bit of money to buy an animal,” said Markham. “The 4H member went back to them and showed them the picture, and after that they began to increase the amount every year.”

Markham said last year he talked them into actually going to the sale.

“They were totally shocked,” he said. “They increased the amount of money so much, seeing all the work these kids do, the commitment and the animals. They were blown away, and I guarantee you they will be back every year. That’s the part that makes you feel good.”

Markham said oil companies and grandparents are two of the biggest supporters out there. “They care about the agriculture industry, and I’m just so impressed with them, as well as the Berthoud businesses who get involved,” he said.

Local 4H leader Kelly Fischer said Markham has been a huge help to her club, the Sagebrush Riders, by spreading the word about the sale and bringing in buyers.

“We’re doing so much better than 15 year ago,” said Markham, who refused to take the credit for the increase in support. “The local leaders and kids go out and knock on doors with me and invite people to the sale. The kids are the ones making it happen, not me.”